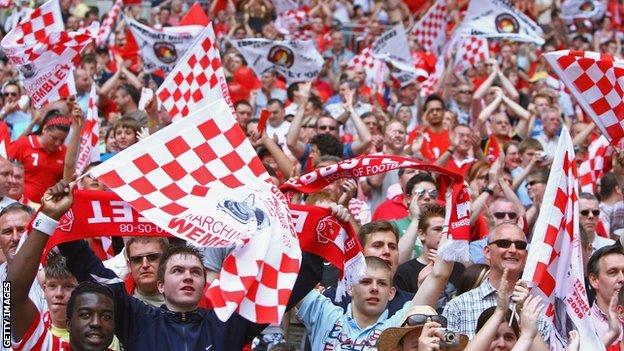 A day out to watch the Kent side play costs as little as £15.50, which includes the price of a ticket, a programme, a pie and a cup of tea.

"You have to find a balancing point, to keep your club going and be affordable for fans," said Ebbsfleet chairman Jessica McQueen.

Premier League side Liverpool have the most expensive equivalent in the country at £47.30.

"This year, we didn't increase our admission for adults but raised prices for concessions," said McQueen. "Now concession tickets are roughly a third of the adult price.

"We are trying as much as we can to keep our prices low and affordable to reflect the area we live in and because we want our fans to continue coming to support us."

Southport are the second cheapest team to support in the Blue Square Bet Premier, with fans able to buy a ticket, cup of tea, programme and pie for just £16.

A day out at Barrow costs £17.30, but that is without the option of a pie, which is not available inside the Furness Building Society Stadium. Spectators can buy a hot dog (£1.60), burger/bacon bap (£2) or cheese burger (£2.50) instead, which bumps up the overall price accordingly.

Alfreton charge at least £24.20 for a day out, which is £8.70 more than Ebbsfleet, while fans can spend as much as £19 on a ticket to see Cambridge United play, which would make the cost of a day out at the Abbey Stadium £26.50.

A day out in the most expensive seats at Championship side Blackpool costs fans just £5.20 more.

When it comes to the price of pies, the Blue Square Bet Premier is not too dissimilar to that of the Premier League, with a top-flight pie costing only 48p more on average.

"But I do know they have always been very popular, particularly with away fans."

The most expensive pie in the Premier League can be bought at Fulham for £3.90, the same price charged by Championship side Brighton.

* Braintree Town refused to take part in the Price of Football study.