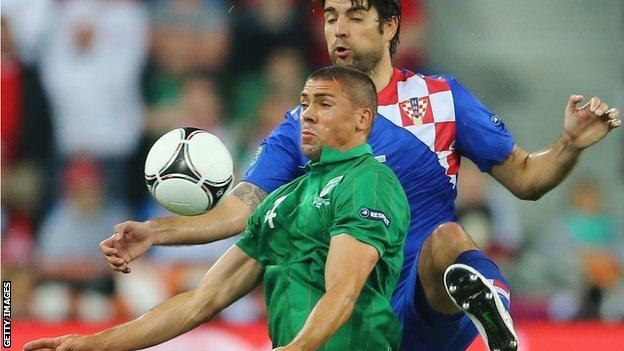 Jonathan Walters will take over from the injured Robbie Keane as the lone Republic of Ireland striker against Germany in the World Cup qualifier.

The Stoke City striker gets the nod ahead ahead of Shane Long for the role after Keane was ruled out on Thursday because of an Achilles injury.

Sunderland's John O'Shea will skipper the team in Dublin in Keane's absence.

LA Galaxy frontman Keane picked up the knock in a training ground collision with defender Paul McShane on Tuesday.

Keane is also a concern for Tuesday's Group C qualifier against the Faroe Islands in Torshavn.

Republic assistant manager Marco Tardelli said on Wednesday that Keane was not a doubt for the game.

Midfielder Keith Andrews sat out the latter part of Wednesday morning's session but he makes the starting line-up along with keeper Keiren Westwood, who was missing on Tuesday.

Andrews, available again after suspension, replaces the injured Glenn Whelan and is joined in midfield by James McCarthy and Keith Fahey.

Like many of the Republic side, McCarthy struggled in last month's opening 2-1 win in Kazakhstan but retains his place while Fahey edges out Sunderland's David Meyler for the other central midfield berth.

Aiden McGeady and Simon Cox are handed wide roles with Walters operating as the central striker.

With Richard Dunne and Sean St Ledger both missing, O'Shea switches from right-back to partner Darren O'Dea in central defence.