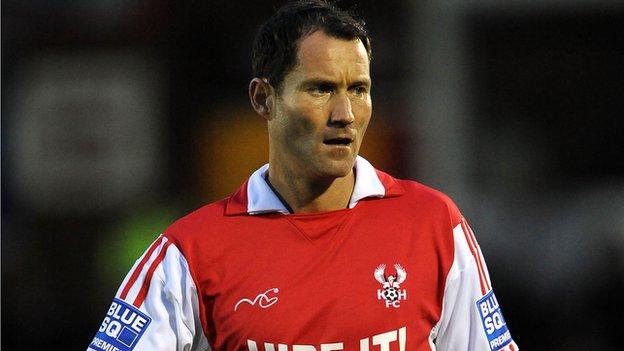 Kidderminster Harriers player-coach Steve Guinan admits there was always a possibility that their remoulded squad might take time to "gel" this season.

"It can take time for a squad to gel," Guinan told BBC Hereford & Worcester.

"We knew behind the scenes we weren't a million miles away but hopefully we have now turned the corner."

He added: "We also knew we had a tough start, although we should have done better than we did.

"It was a long time before we got the chance to name the same team.

"But confidence comes from playing games and scoring goals and the players now look a different proposition to how they were back in August.

"And we are now looking to start climbing the table."

The deadline day signing of centre-half Josh Gowling, to compensate for the sudden departure of summer signing Exodus Geoghegon, appears to have been one of the factors in the Harriers' revival.

And there is a sense of relief at the club that, after being stretchered off with a suspected broken leg in Tuesday's 3-0 home win over Hyde, X-rays have shown that Gowling has not broken his shin.

It still makes him a big doubt for Saturday's trip to Stockport on Saturday and there is mild concern over the groin injury suffered by James Vincent.

As far as Guinan is concerned, though, he is once again expecting to sit it out, having so far not even played 90 minutes of competitive football this season, in his four outings from the bench.

"I've got the gaffer and our assistant manager Gary Whild to thank for letting me come on board. We talk about selection and squad issues and I have my say at half time and before the game," said the much-travelled Guinan, who will turn 37 on Christmas Eve.

"I really feel part of it and hope I've contributed to the three wins and a draw we've had since I became player-coach,

"But I don't think I'll be getting the boots back on as long as we're winning."