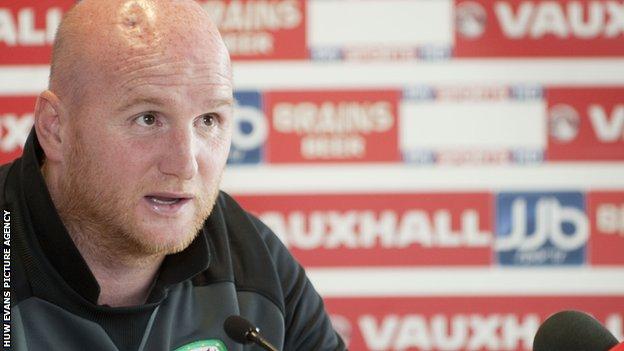 Assistant manager John Hartson says he is not unduly concerned by Wales' lack of goals.

Chris Coleman's side go into Friday's World Cup qualifier against Scotland having scored only once in their last five matches.

Wales have not scored from open play since November 2011 but Hartson is confident goals will come.

"It's not a major worry to us at the minute but we know about it," said former Wales striker Hartson.

"We're aware of what it takes to win football matches.

"If we weren't really creating chances I'd be more worried but hopefully on Friday we can create plenty of chances and we'll score some goals."

Wales' only goal in their last five internationals was a free-kick scored by Gareth Bale in the 6-1 defeat in Serbia in September.

Sam Vokes was the last Wales player to score from open play, during a 4-1 friendly win over Norway in November 2011.

Hartson, who has offically joined the coaching team, is more worried about the fact that Wales' strikers - including Vokes - are not playing regularly for their clubs.

"It's a slight concern for us that our strikers are not playing week in week out," said the former Celtic striker, who scored 14 international goals.

"Sam Vokes is not currently in the Burnley side, Simon Church is in and out at Reading and Steve Morison doesn't play every week at Norwich.

"We've brought in [Craig] Davies from Barnsley, who has been scoring goals regularly and you can't beat having competition in the squad.

"When the team are on the front foot and playing well the goals will come. I think it's more of a problem conceding them at the minute than scoring them."

Hartson scored the winner for Wales in a friendly against Scotland in May 1997.

And the former Arsenal and West Ham player says the Wales players will not need any extra motivation ahead of the game at Cardiff City Stadium.

Wales lost their opening two games, against Belgium and Serbia, while Scotland were held at home by the Serbians and Macedonia.

"The one good thing about Friday is that you don't necessarily need to get the players up for this game," Hartson said.

"It will be like an old fashioned British-type derby, where the players will know each other pretty well having played against each other several times and some playing in the same clubs.

"We expect it to be pretty fast and furious like a typical British-type game.

"We know what we have to do. We know the importance of three points but are also not underestimating the Scottish side. They are a very strong side with a good blend.

"We know we have to improve on Serbia where it wasn't good enough.

"We need to improve on our last performance to get anywhere near Scotland, who've come off two home draws.

"They would have probably expected to win at least one of those games.

"I think Scotland may well feel they may perform better away from home. It's a big game and the result is massive.

"We know how important it is to get a win against our arch-rivals."