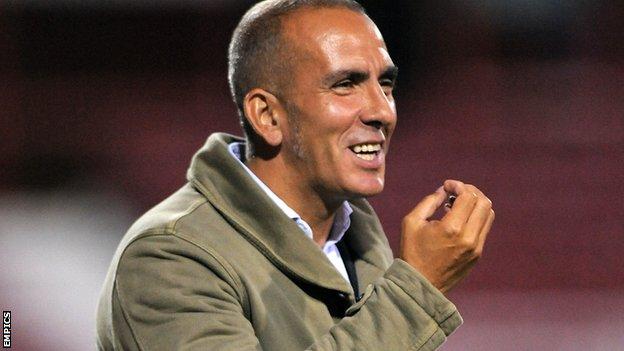 Swindon Town manager Paolo Di Canio has denied claims he is in line for the Bolton job but admits he is happy to be linked with other clubs.

Bookmakers have placed the 43-year-old Italian among the favourites to replace Owen Coyle, who was sacked by the Championship outfit on Tuesday.

"It's better than not reading your name," Di Canio told BBC Wiltshire.

"We can joke about it but it doesn't change that I am working for Swindon, so there's no need to think about it."

Former Manchester United striker Ole Gunner Solskjaer has also been mooted as a contender for the vacant job at the Reebok Stadium, along with former Wolves boss Mick McCarthy.

Di Canio led Town to the League Two title last season - his first year in management - and was awarded with a new three-year contract to keep him at the County Ground until 2015.

The club have kept up their form this term and currently sit fourth in League One.

Di Canio's impressive record has led him to be linked with jobs higher in the football pyramid - including Swansea, West Ham - where he had his most successful spell as a player - and Sheffield Wednesday, where he played from 1997 to 1999.

"It means people think I have already done a good job," he continued.

"They look at the statistics and think 'there is Di Canio, who has won nine games from 15 already'. Including last year, I've had more than 61% victories.

"It means they are looking at the people who have got good results at lower levels and that is something you appreciate.

"But it's not the club but the people that bet money who put you in second or third [favourite]. Before I signed for Swindon I was linked to West Ham and yet nobody contacted me."

Di Canio's managerial success - which has seen him win 45 out his 73 games in charge - has often been eclipsed by his off-field antics.

Last season, he was involved in a pitchside row with loan striker Leon Clarke and was the subject of a Football Association investigation after he allegedly racially abused loanee Jonathan Tehoue.

Most recently, Di Canio publically criticised goalkeeper Wes Foderingham and vowed never to play him again unless he apologised for his mistake which led to a Preston goal - an error which saw the keeper substituted after 20 minutes.

The flamboyant Italian says he welcomes being named among the favourites for other jobs as it brings him positive headlines:

"In the last few months, I've only read my name relating to bad things, so I prefer it," he added.

"Sometimes some people forget the good and then they think 'he subs the goalkeeper, he is mad'. And then when you win, you beat Stoke City, and they say you are not bad."