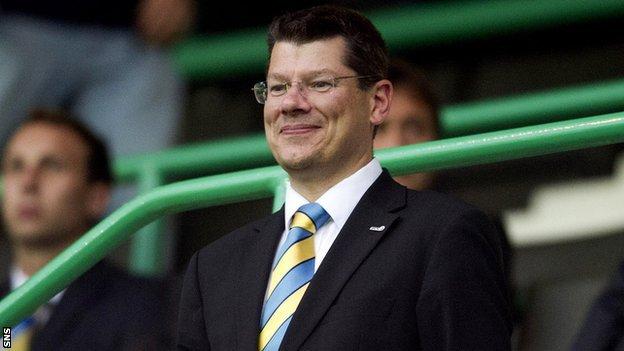 Rangers were relaunched by a new company after the former incarnation could not be saved from liquidation.

All of our major partners and major sponsors, they've stuck with the SPL

The club was subsequently placed in Division Three, making SPL season 2012-13 the first without Rangers.

"We've had to re-invent ourselves but that's happened pretty quickly and clubs have adapted," said Doncaster.

"It was a traumatic summer for everyone involved in the game in Scotland. We were delighted to see the season get under way and the focus be back on football once again.

"There'd been so much discussion around the whole Rangers situation. To get the season under way, to then be looking forward rather than back was a great relief for everyone.

"The SPL and the clubs have adapted remarkably well to what people really couldn't ever see happening.

"It was such an unforeseeable thing that one of the major houses, the economic power houses, in Scottish football should suddenly be out of the SPL.

"I don't think anyone around the world who you speak to can quite believe that what happened happened, but it did."

Doncaster, who highlighted this season's top-flight Dundee and Highland derbies as compensating for the loss of Rangers, feels the retention of commercial partners has been crucial to the SPL's continued stability.

"There is absolutely an economic knock-on effect at the club level," Doncaster told BBC Radio 5live.

"All of our major partners and major sponsors, they've stuck with the SPL and that's enabled the clubs and the league to go forward with huge confidence.

"People had the opportunity to walk away over the summer and chose not to. They've stuck with the league and that's important."