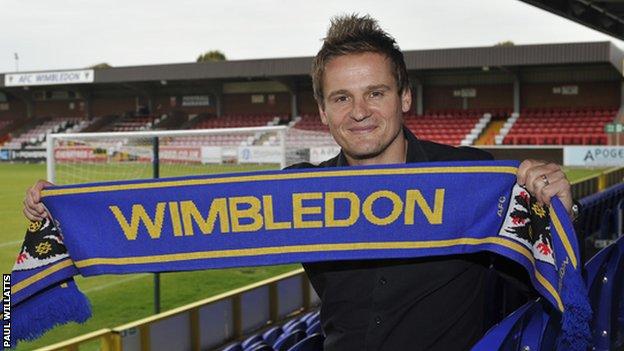 Newly appointed AFC Wimbledon manager Neal Ardley says his first priority will be to steer the club up the League Two table.

The 40-year-old former Wimbledon midfielder was unveiled as the Dons' new boss on Wednesday.

He told BBC London 94.9: "The first job is to try everything you possibly can to start winning some games.

"We've got a long term plan and a long term vision but if the results don't come, the long term doesn't matter."

He added: "We need to start getting results then hopefully we can build the long term plan this club will want and expect."

The Dons currently lie 21st in League Two, with ten points from their eleven matches and the second worst goal difference in the league.

Ardley, who has spent the last five years as the academy manager at Cardiff, is enthusiastic about being handed his first managerial post.

"I always wanted to be a manager," he continued.

"It has always been my dream ever since I was a player. I've had a five-year apprenticeship, so to speak, at Cardiff working with some fantastic people, learning loads and developing what I wanted to do.

"Hopefully I'll get the chance now to put it into practice and show what I can do."

Terry Brown, who led the Dons into the Football League in 2011, was sacked last month following a poor start to the season.

Ardley made over 300 appearances during an 11-year spell with the original Wimbledon FC and hopes he can help the club to continue progressing.

"I'd like to play my part in what's gone on over the last 10 years at this club and try and help it get to a new level, if I can.

"I will work day and night to make that happen."

"We've been given an opportunity to push the club forward and that's what we're looking forward to doing," Cox told BBC London 94.9.

"I've known Neal about 20 years and have been doing a bit of work with each other over the last couple of years. I jumped at the chance straight away.

"It's a tough job but we're all looking forward to it."