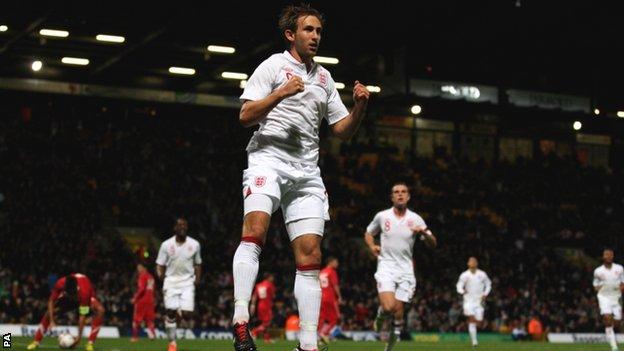 Stuart Pearce's England Under-21s took a significant step towards Euro 2013 with victory over Serbia in their play-off first-leg at Carrow Road.

West Brom defender Craig Dawson scored the only goal of a breathless game from the penalty spot after Tottenham full-back Adam Smith was fouled in the box.

England could have won more comfortably but have the upper hand going into the second leg in Krusevac on Tuesday.

The only negative was a hamstring problem picked up by Jack Rodwell.

This was a seventh consecutive home win in a competitive match for England, equalling a record dating back more than 27 years. There was plenty of encouragement for Pearce against a Serbia team that had gone unbeaten in qualifying.

The performance of Raheem Sterling, on his debut at this level, was eye-catching. The Liverpool winger, with feet as sensitive as pick-pockets' hands, produced a bewildering repertoire of feints and swerves, sudden stops and demoralising spurts, turning and tormenting the Serbia defence time and again.

Blackpool's Tom Ince was equally impressive, without being able to apply a finish. With those two in his ranks, Pearce's side bristled with menace as England's wingers swapped places, eluded markers and dismantled Serbia's defensive system during a breathless and at times brutal opening period.

German referee Deniz Aytekin had shown three yellow cards by the seventh minute, as Serbia attempted to keep England's flyers in their blocks.

The best of England's early opportunities fell to Ince. The Blackpool winger combined well with Danny Rose in the 12th minute, only for the ball to skid off his forehead and beyond the far post with the goal at his mercy. A heavy first touch saw a second chance get away from Ince before a fizzing left-foot shot flashed narrowly wide.

England pushed for the breakthrough but with two clever, probing attacking surges Serbia served to remind everyone inside Carrow Road of their attacking potential.

Luka Milunovic might have done better when Darko Lazovic picked him out with a delightful cross from the right after a quickly-taken throw in. But despite being unmarked, the Red Star Belgrade striker got his header all wrong from six yards, before Sasa Markovic scuffed a shot wide from the edge of the box moments later.

Lazovic thumped a left-foot volley narrowly over for Serbia but it was England who made the brighter start to the second half. Sterling might have won a free-kick on the edge of the penalty area with another of his devastating surges but the referee allowed an advantage, which ultimately came to nothing.

The German official did blow his whistle soon after, however, as Adam Smith reacted first to a scrambled clearance of his initial cross to win a penalty for England after a mistimed challenge by Milunovic. Dawson made no mistake from the spot, his fifth goal in eight matches for Pearce's side.

Zaha should have doubled England's lead within two minutes as Ince burst down the left flank and found the Crystal Palace winger, whose left-foot shot flashed wide with the goal at his mercy. Then Steven Caulker was denied with eight minutes remaining as Serbia goalkeeper Branimir Aleksic produced a stunning save to turn his header away.