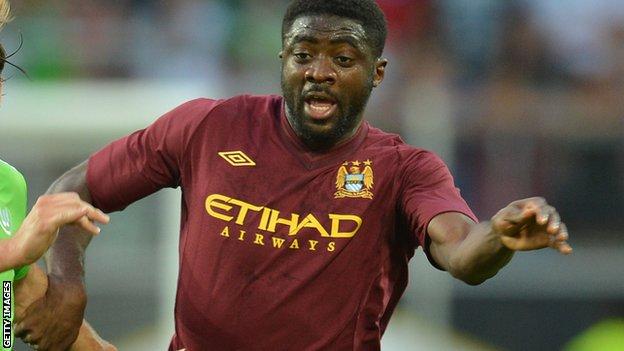 Manchester City centre-back Kolo Toure says he will fight for his place in the side, despite currently finding himself fourth-choice at the club.

"It's difficult, I was a key player. I've done everything but that will not change the manager's decision."

Toure, who signed for the reigning Premier League champions from Arsenal in 2009, added: "I like City and this season I started every game pre-season.

"But when the season started I've been kicked out again from the team. It was difficult."

Having served a six-month ban for failing a drugs test last year - what Toure calls his "stupid mistake" after taking one of his wife's diet pills - the desire to succeed in the final years of his career is evident.

"I fight. My team-mates know, my brother [City midfielder Yaya] knows. I do my best but the club are showing me the way out at the moment," he said.

"I'm not angry with the manager. If someone doesn't want me then there will be another club that does.

"I still have this hunger. I take Ryan Giggs (who is 38) and Paul Scholes (37) as an example: what they are doing for Manchester United is incredible. I want to be like them."

Meanwhile, Roque Santa Cruz has revealed he does not want to return to City when his loan at Malaga expires at the end of the season.

Paraguay international striker Santa Cruz, 31, has made just six league starts for City since joining from Blackburn Rovers for £18m in 2009.

"I do not see myself going back to the Premier League because my family are very settled here and I do not want to keep bringing my children back and forth (between England and Spain)," Santa Cruz, who moved to Malaga at the end of August, told BBC Sport.

Santa Cruz has featured for Malaga in this season's Champions League.

And the former Bayern Munich player says he has received permission to play against his parent club if Malaga are drawn against City in the knockout stages.

"This is something that would be great for me - going back to Manchester to play them in the Champions League," he said.