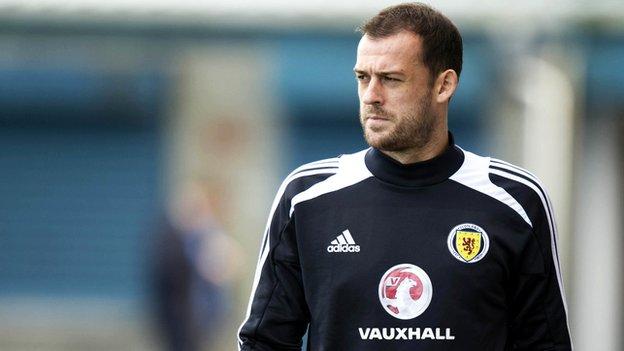 Former Scotland strikers Billy Dodds, Steven Thompson and John Robertson all have different views on how the team should line up for Friday's vital World Cup qualifying match in Cardiff.

But all three agree that Steven Fletcher is the man to spearhead Scotland's attack.

One goal, against Iceland, in eight internationals are hardly the kind of statistics to get pulses racing.

But Fletcher's red-hot start to the season with Sunderland, a shaky opening to Scotland's World Cup qualifying campaign and reconcilliation between the player and national coach Craig Levein led to the striker's return to the fold.

So, will Kenny Miller, who has scored 17 international goals, be denied a starting place at the home of former club Cardiff City?

"But it's harsh on Kenny because he's been phenomenal for Scotland.

"I played with Fletch at Burnley and he's an exceptional talent.

"Up front on your own is a speciality role and he ticks all the boxes. He can link the play, he's very intelligent, and he can play on the shoulder like Kenny does.

"And he's good at getting on the blindside of defenders and looking for the wee balls in behind that Shaun Maloney can play very well."

Dodds, who won the last of his 26 caps in 2001, also has sympathy for Miller, who scored in the 1-1 draw with Macedonia that followed last month's 0-0 at home to Serbia.

"He is not proven as a striker at this level but he's flying at the moment."

Former Hearts star Robertson, who played with Levein for club and country, also thinks Fletcher will be given the nod after his exile but the pundits are split on who should provide the ammunition for the striker.

"Craig's preferred formation is a 4-1-4-1," he said. "As we've seen already, it's economical going forward but hard to beat going the other way.

"That might have worked for Scotland away to any other side but this is shaping up to be a classic British cup tie.

"If both sides had made good starts, say four points from six, we'd be a bit cagey, thinking we can 'maybe nick this one'.

"But this is basically a knock-out game. The draw does not suit either team.

"I'd like to see Charlie Adam doing the sitting, allowing him to get on the ball and get the passing going, with Darren Fletcher and Scott Brown using their energy to get further forward.

"I think James Forrest will start in one of wide areas and then it's a decision on whether to go with the in-form Kris Commons or Matt Phillips, who is quick and a big strong lad that will work up and down."

Commons, a late call-up after a lengthy absence from Levein's squad, has been in sparkling form for Celtic this season.

But Dodds does not think the midfielder fits neatly into the manager's system.

"He's playing out of his skin but I don't think we'll see Commons in a wide area because of his work ethic," he said.

"He's been at his best behind Gary Hooper through the middle for Celtic, so, if we need a player to come off the bench and support the striker, he is ideal, although Maloney can also do that job."

The return of Manchester United's Darren Fletcher after his long illness-related absence is a real boost for Scotland.

But Dodds believes the skipper may be best deployed in a deeper role at the expense of Adam.

"He has been out for so long, so he might be given the sitting job, patrolling in front of the defence," he added.

"It's a massive bonus to have him back and not just because he's a great footballer," said Thompson. "He's a leader, he's a winner and when you need someone to drag the team forward, Darren Fletcher is your man.

"Wales will be so up for this game after their last result [the 6-1 defeat by Serbia], which was unacceptable.

"Aaron Ramsey, Joe Allen, Gareth Bale and Joe Ledley are all top, top players, so our midfield will need to be strong to match that."

Brown missed the Serbia and Macedonia games with a hip injury that continues to trouble him and Celtic boss Neil Lennon suggested the midfielder may only manage one outing in this double-header..

"If he can only play in one, I'd play him against Wales; this is the game we need to win," said Thompson. "He is a big character and brings great enthusiasm."

But Dodds chips in: "You lose something if Brown is pushed out wide to maybe combat Bale. We might be better using Forrest on the right to keep Bale pinned back."

For Robertson, this could prove a pivotal moment which puts Scotland's qualification campaign back on track.

"We're behind the eight ball at the moment," he said.

"But, if we get a positive result on Friday and take something from the game in Belgium, suddenly we're back in it again and the whole mood changes."

However, Dodds served a succinct reminder of what a negative result could mean.

"Anything less than three points then it's tattie bye," he said.