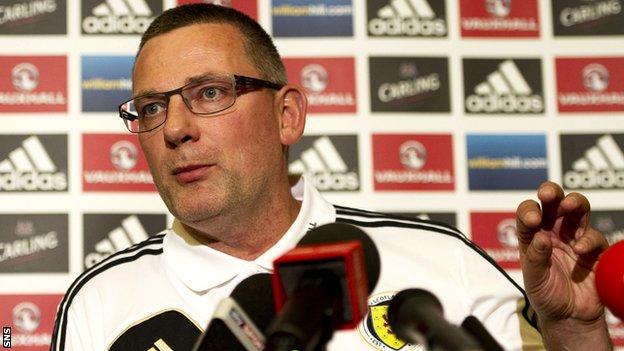 Manager Craig Levein is backing his Scotland players to handle the pressure as they bid to beat Wales in Cardiff.

The Scots have made a poor start to the World Cup qualifying campaign, drawing with Serbia and Macedonia at Hampden.

"These guys we have play in the biggest leagues in the world every week in front of TV audiences of millions and they cope with it," said Levein.

"I don't think there is going to be any worry at all in our team about being able to handle the pressure."

With just two points from two home games, Scotland trail Serbia, Belgium and Croatia, who each have four points, in Group A.

But Levein refused to label the match at the Cardiff City Stadium a "must-win".

"This group is fraught with danger as we have seen with results already," he explained.

"I couldn't tell you what's going to happen in Serbia tomorrow (with Belgium the visitors).

"Our intention is to win this game and I'm sure that Chris Coleman has the same objective.

"I don't think that trying to forecast results does anybody any good."

And when put to Levein that both sides need the three points from this match, he said: "Agreed. And that makes it even more exciting, doesn't it?

"I've been looking forward to this game from the moment the draw was made."

Wales are also under pressure to bolster their own hopes after suffering defeat in their opening two matches - including a 6-1 thrashing to Serbia.

Levein stressed the difficulties faced by himself and opposite number Coleman as international bosses but says he is still relishing being at the Scotland helm.

He added: "I had a brief chat with Chris down in London a couple of months ago about the differences between club management and international management.

"There are a lot of differences - it's a tougher job I believe.

"There are very few fixtures and because of that the intensity increases around each game and there isn't a great deal of logic to levels of patience that some people have.

"Sometimes, if you have a poor result, you have to wait a period of time to fix it, which makes it quite difficult.

"We've both got tough jobs but you don't take the job that I'm in or Chris is in and think that everything is going to be easy because that's just impossible.

"Yes, it's tough but I'm the proudest man in Scotland to be the Scotland manager. Anything that comes with it, I'll take it just so that I can do this job."