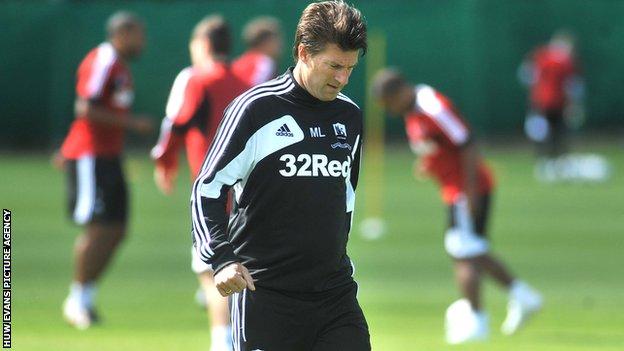 Swansea chairman Huw Jenkins has dismissed a national newspaper claim that there is a rift between manager Michael Laudrup and his players.

The club released a statement denying there was disharmony at the Liberty Stadium.

"Today's article trying to cause unrest at the club will only help to strengthen our resolve going forward," said Jenkins.

Swansea have failed to win their last four games in the Premier League.

"I've said from the very first day I arrived here that my door is always open.

"Michael Laudrup and his staff have the full support of everyone connected to Swansea City and will continue to do so during the long season ahead," insisted Jenkins.

"No doubt from time to time outside forces beyond our control will make attempts to unsettle our football club and we have to accept that.

"Swansea City will remain solid, on and off the football field, and will continue to fight against all the odds to compete at Premier League level."

Laudrup saw his side win their first three games in charge after he was appointed in the summer, replacing Brendan Rodgers who left for Liverpool.

The former Danish international, whose Swansea side are 11th place in the Premier League, revealed he was surprised at the claims of unrest.

"I am a little surprised by today's story," said Laudrup.

"I've said from the very first day I arrived here that my door is always open.

"There will always be some players disappointed if they are not playing, but that's the same at any football club. Perhaps today's story is a result of that.

"But we will never let these type of stories unsettle us and will continue to push this club forward.''