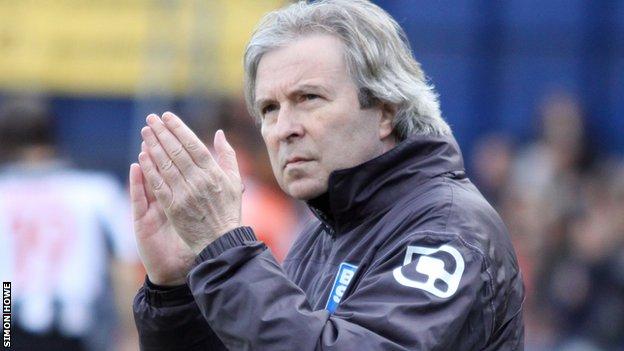 Assistant Lee Howells has been promoted to first-team coach at Bath City, with manager Adie Britton taking on a director of football role.

Britton has been in charge for four years and led the club back to non-league's top flight in 2010.

But they were relegated to Blue Square Bet South last season and have won just 10 of their last 56 league matches.

"It was something we discussed over the summer," chairman Manda Rigby told BBC Radio Bristol.

"We've got to the stage where three or four matches haven't been quite what we expected and to freshen it up at this stage of the season is probably a good idea.

"I think the players will appreciate that we need to make some sort of change. All the feedback I've had suggests it is a really good move.

"In the stands, I don't know what they will think. There'll always be some people who embrace change but others may think it is too much change.

"We've looked at many options and we firmly believe this is the right one."

Following their play-off success in 2010, they finished 10th in their first season back in the Blue Square Bet Premier - the highest-placed part-time side in non-league - but ended up bottom of the table last term.

Despite winning three of their five opening games this season, the Romans' form has slumped and they now sit 17th in the league - one point above the drop zone.