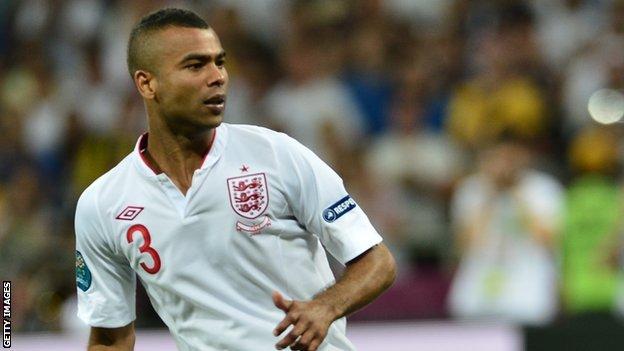 Ashley Cole has been fined £90,000 for using an expletive on Twitter to describe the Football Association following the John Terry racism case.

The Chelsea and England left-back, 31, admitted the FA charge of posting a comment which was deemed to be improper and/or brought the game into disrepute.

He escaped a ban after personally apologising to FA chairman David Bernstein.

It is the largest fine ever given out by the FA in relation to social media.

"He showed real remorse," said Bernstein after their conversation.

Only two days earlier Bernstein had revealed the England squad had been spoken to about a new code of conduct.

Responding to the FA's judgement in the Terry racism case, Cole tweeted: "Hahahahaa, well done #fa I lied did I, #BUNCHOFT***S".

Cole quickly deleted the tweet and issued an "unreserved apology".

His message, which was retweeted more than 19,000 times, came after his evidence to an independent FA commission - which found Terry guilty of racially insulting Anton Ferdinand during a match between Chelsea and QPR last season - was questioned.

Cole did not feature in England's 5-0 World Cup qualifying victory over San Marino on Friday but won his 99th cap in Wednesday's 1-1 draw with Poland.

Cole, who had requested a non-personal hearing, was also warned about his future conduct.