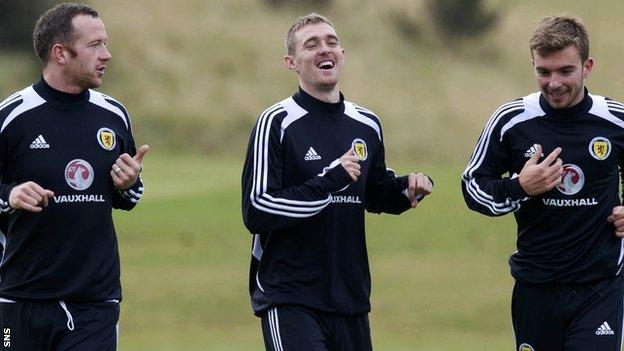 Kris Commons and Steven Fletcher will start for Scotland in their World Cup qualifier against Wales, while Darren Fletcher returns as captain.

Winger Commons had been called into the squad after Robert Snodgrass and Jordan Rhodes dropped out through injury.

Midfielder Darren Fletcher was out of action for 11 months with a chronic bowel complaint.

"I feel fit, I feel strong and I feel ready for the games. It's great to be back," said the 28-year-old.

"I'm just desperate to start. Hopefully I'm playing and I can do my part in getting a good result for Scotland."

With Celtic's Commons wide on the right, with Wigan Athletic's Shaun Maloney on the opposite wing.

Darren Fletcher and midfielder Scott Brown will be holding midfielder in the centre.

With Allan McGregor in goal, the defence is along expected lines, with Alan Hutton and Danny Fox as full-backs, with Gary Caldwell and Christophe Berra in the centre.

Darren Fletcher has made three appearances for United since boss Sir Alex Ferguson decided he was ready to return in mid-September.

Now Scotland manager Craig Levein is delighted to be call on him for the vital double-header, starting with Friday's match against Wales in Cardiff.

"When Sir Alex thinks Darren is capable of starting, that tells me he's back to the point where he is capable of playing in any situation," explained Levein, whose side have collected just two points from their opening two qualifying games.

"He has played some big games for Manchester United since he came back. I've been in constant contact with him for the last year or so and I feel he's ready to go.

Fletcher, who won the last of his 58 caps in a friendly against Cyprus in November 2011, insists he never gave up hope of representing his country again.

Scott Brown, James Forrest and Andy Webster did not train with the rest of the squad before their arrival in Wales early on Thursday evening.

Celtic skipper Brown missed the opening draws with Serbia and Macedonia with an ongoing hip injury, but Levein expects him to be fit for Friday's match in Cardiff and is hopeful winger Forrest and defender Webster will recover from what he described as "niggles".

Striker Steven Fletcher has also returned to the Scotland fold after an exile of almost two years having resolved his differences with Levein, but the manager would not talk about his team selection.

Levein said: "Although we've lost Robert Snodgrass, which is a blow, to have someone of the quality of Kris Commons to come in shows we have real strength in depth. Training has been excellent this week and I think every time you add a quality player it raises the bar."