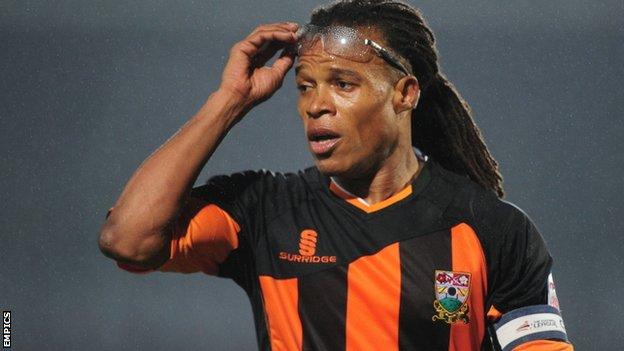 Former Netherlands international Edgar Davids made his first start for over two years and promptly helped Barnet to their first league win of the season.

Davids last week and was surprisingly named as captain.

Krystian Pearce headed the Bees into the lead from a corner before Andrew Yiadom scored with a deflected shot.

John Oster then drove in from 20 yards and Anthony Edgar wrapped up the win with a stoppage-time shot.

Despite the win, Barnet remain bottom of the Football League.

"We made a team at the bottom look like superstars, and they're not.

"We've got a lot of young players, we've lost our third right-back (to injury), but we're coming here to win - not get beat 4-0. It's not acceptable.

"We were suicidal. We made some ridiculous decisions in possession.

"There was fantastic support again and what I can promise is we will be back, working hard to make sure that we continue the progress we've made. I went over and clapped the fans, because it isn't their fault we were rubbish tonight."