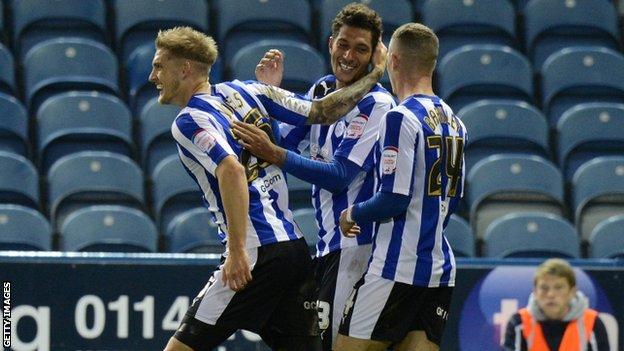 The game was marred during the celebrations of Tonge's goal as

Jay Bothroyd had earlier given the hosts a deserved lead as he headed in a throw just before the interval.

The result extended the Owls' wait for a first league victory since August.

Sheffield Wednesday came into the Yorkshire derby on a run of six league defeats from seven games, with manager Dave Jones bemoaning a lack of luck and chairman Milan Mandaric obliged to give his manager a vote of confidence before the international break.

Jones nearly got the change of fortune he sought as the match got off to an embarrassing start for Leeds goalkeeper Paddy Kenny, who fumbled a 35-yard drive from striker Bothroyd onto the crossbar.

And the hosts were certainly unlucky when Leeds striker Luciano Becchio blatantly punched the ball away from the waiting Anthony Gardner at a corner, but their appeals for a penalty were mystifyingly waved away by referee Eddie Ilderton.

Tensions started to show as the half wore on, Owls defender Miguel Llera appearing to strike Michael Brown and Leeds forward El Hadji Diouf squaring up to Jose Semedo after a perfect challenge from the hardworking Portuguese defensive midfielder.

Wednesday looked likely to reach half-time without the goal their play had merited until Bothroyd headed in a long throw from winger Michail Antonio to provide some much-needed cheer for home supporters.

The goal was the one-time England international's first in nearly a year - he last found the back of the net for parent club Queens Park Rangers against Manchester City on 5 November 2011.

A scrappy start to the second half saw a number of players booked as an underwhelming Leeds struggled to make their superior position in the league table show.

Indeed, they could have fallen further behind when the hosts' centre-back duo of Llera and Anthony Gardner formed an unlikely combination in the opposition penalty area before the latter shot over the bar.

Leeds had continued to struggle to put any attacks together, but with a quarter of an hour to go Tonge produced a moment of real quality as he struck a beautiful half-volley from outside the area that moved away from keeper Kirkland.

Then came the game's defining image as a supporter ran on from behind Kirkland's goal and knocked him to the ground. The shaken former-Liverpool keeper required several minutes of medical treatment before continuing.

Once play restarted, Leeds failed to build on the momentum of Tonge's goal and could not force the win that would have seen them move up to third.