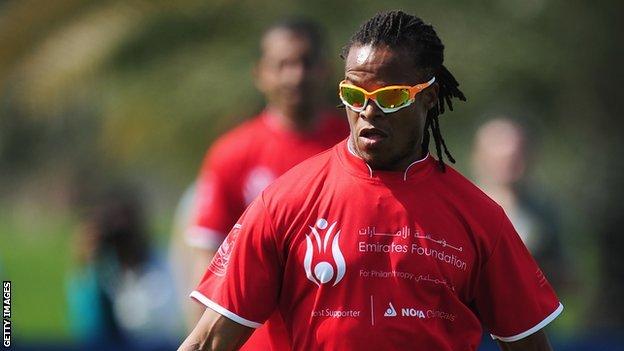 Former Dutch midfielder Edgar Davids has joined League Two side Barnet as joint-head coach with a view to also resuming his playing career.

The 39-year-old, who played for Ajax, Juventus and Barcelona in a glittering career, will assist Mark Robson at the Football League's bottom club.

Davids tweeted: "Happy to say I will join my local football club Barnet as a player/coach."

A Barnet statement said he could make his debut within a fortnight.

Bees director of football Paul Fairclough added: "The capture of Davids is a statement of intent by our club to improve results and lay further foundations for the future.

"Edgar is a world-renowned footballer and will be a great example to all our young players."

Davids said: "I'm happy to explore my possibilities and share my knowledge and experience with Barnet. I am very excited about the challenge ahead."

Barnet are yet to win a game this season and have just three points from their opening 11 fixtures.

Davids, who came out of retirement to play six games for Championship side Crystal Palace in 2010, also spent a couple of seasons at Tottenham between 2005-07.

In Italy, he picked up three Serie A championships with Juventus and the Coppa Italia with Inter Milan.