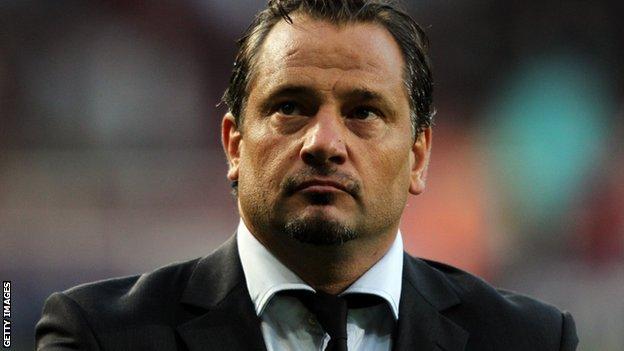 Aldershot Town chairman Kris Machala has given his backing to manager Dean Holdsworth.

The Shots lie in the League Two relegation zone and have lost their last five matches in all competitions.

Machala told BBC Surrey: "Our current form is not a big problem for me. We could have three or four wins and suddenly things are much better.

"It's too early to worry. If things are still looking bad after maybe half the season, then that might be different."

I trust Dean to sort it out. I don't want to interfere all the time

He added: "Results ultimately will be the key factor, but time is a good doctor."

Holdsworth led the Shots to 11th place in League Two last season, in what was his first full campaign in charge of the Hampshire outfit.

However, the club have only won two league games this season and, following their fifth defeat in a row against Plymouth in the Johnstone's Paint Trophy, Holdsworth said he would be "very harsh" on his players.

Machala has faith that the former Newport County boss, who took charge at the EBB Stadium in January 2011, will guide the club up the table.

"A lot of things can go wrong at a football club all the time," Machala continued.

"Maybe there are issues with some of the players.

"I trust Dean to sort it out. I don't want to interfere all the time."

"This weekend's game at Gillingham is a real chance to prove that any team can beat any other team in this division," Machala said.