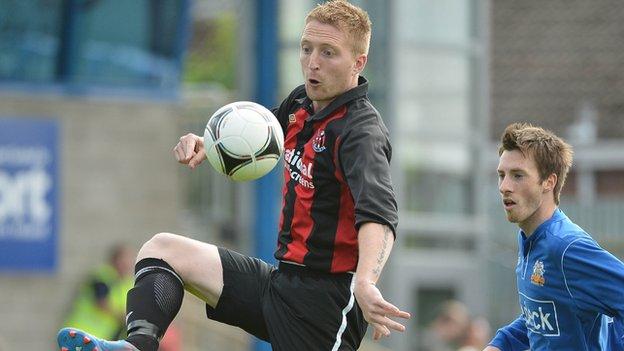 Crusaders will be without key midfielder Chris Morrow for Saturday's derby clash against Premiership leaders Cliftonville at Seaview.

Morrow injured a knee in the midweek League Cup win over Carrick Rangers, while Aidan Watson also has a knee problem and faces a late fitness test.

"But we have picked up a couple of good results so confidence is high."

The Mallards produced an upset last weekend by beating champions Linfield 3-1 at Windsor Park but they are missing the suspended Mark Stafford after his dismissal in Tuesday's League Cup defeat at Cliftonville.

Linfield midfielder Michael Gault is sidelined for the visit to Dungannon Swifts after picking up a knee injury in training.

However, Blues boss David Jeffrey has been boosted by the news that striker Matthew Tipton could return in four to six weeks from a knee ligament injury, much sooner than expected.

Aaron Stewart is a doubt for Ballymena United ahead of their Showgrounds game against Glenavon.

Stewart suffered a head gash in last weekend's draw with Portadown while fellow defender Johnny Taylor could make his comeback from injury.

Elsewhere, Glentoran take on Portadown at the Oval while Declan McGreevy starts his reign as Donegal Celtic manager with a basement battle against Lisburn Distillery at Suffolk Road.