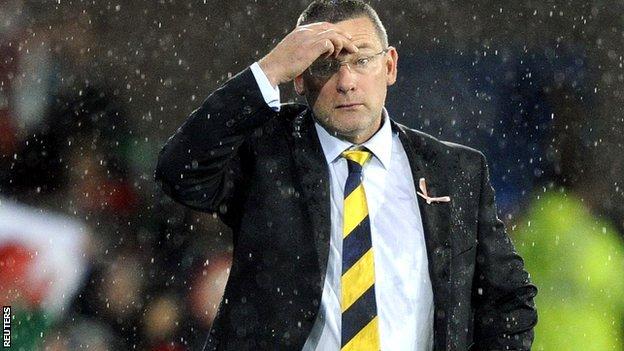 Before the World Cup qualifier in Cardiff, Scotland coach Craig Levein warned that Group A was "fraught with danger".

All too often, Scotland have found new ways to dash hopes, but this pulsating night in Cardiff was off the emotional scale.

Levein started with an attacking line up, Steven Fletcher spearheading the front line for a side straining at the leash following two poor displays at home to Serbia and Macedonia.

With captain Darren Fletcher restored to the centre of midfield and Gary Caldwell moved back to central defence, the Scots looked strong and were at last baring their teeth.

Both sides lacked composure in front of goal and it made for a fascinating contest in a derby-type atmosphere.

James Morrison's goal, after Wales had spurned a glorious chance, saw Scotland capitalise on their bright start and brought a beaming smile from Levein.

Bale put two chances on a plate: for Steve Morison and Aaron Ramsey, but neither could profit.

Undeterred, it was the talismanic Bale who ultimately broke Scottish hearts in the Welsh capital.

The Scots looked to have weathered more than one storm in Cardiff, but you can never discount that man Bale.

Levein's side lack a talismanic figure who can change the course of a game. Captain Darren Fletcher is the closest Scotland have but he leads by example and lacks the creativity to unlock a defence.

Levein's future will be the matter of debate among frustrated supporters

While Scotland roared in the first half, they barely raised a whimper in a disappointing second.

Controversy abounds over the Bale penalty, a Fletcher chalked-off effort that would have made it 2-0, and a number of other baffling decisions from the match officials.

Afterwards, a dazed-looking Levein vowed to tough it out and said that, despite being angry, now was not the time to vent that anger.

However, it cannot mask Scotland's deficiencies as Charlie Adam failed to compensate for the absence of the combative Scott Brown after the break.

With two points from a possible nine in Group A, the Tartan Army may vent the Scotland coach's fury on his behalf.

Levein wiped the driving rain from his glasses as he stood, shell-shocked, in the technical area as the inevitability of defeat soaked his suit.

His future as Scotland manager will be the matter of some debate among frustrated supporters in the coming days and weeks.

Levein knew Group A was dangerous, but his side were powerless to heed the warning signs as their dreams of gracing Brazilian sand slipped through their fingers.