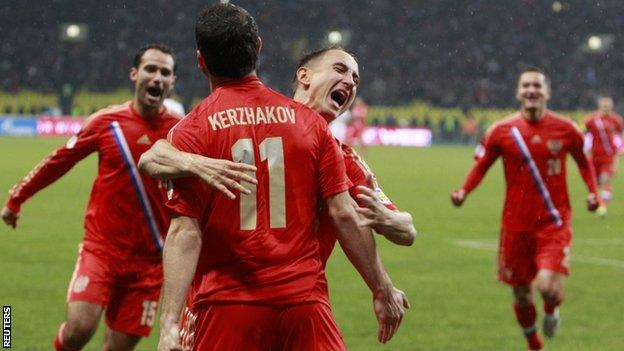 Fabio Capello's Russia beat a Portugal side captained by Cristiano Ronaldo to maintain their impressive 100% start to the World Cup qualifying campaign.

Alexander Kerzhakov scored the only goal to keep Russia top of Group F.

Elsewhere, Sweden narrowly avoided embarrassment in Group C, coming from behind to beat the Faroe Islands 2-1.

Belgium became the first team to beat Serbia in a home World Cup qualifier for more than 10 years, as they eased to a 3-0 victory in Belgrade.

Before tonight's defeat by Belgium, Serbia had not lost a World Cup qualifier at home since 25 April 2001, when they succumbed 1-0 to Russia

Belgium now sit top of Group A, thanks to goals from a trio of Premier League players - Aston Villa's Christian Benteke, Chelsea's Kevin de Bruyne and Kevin Mirallas of Everton - with Croatia moving into second after a 2-1 win over Macedonia.

Italy claimed a hard-fought 3-1 victory over Armenia to extend their lead at the top of Group B. Andrea Pirlo opened the scoring in the 11th minute with a penalty, but a relentless response from Armenia saw then deservedly draw level through the in-form Henrick Mkhitaryam just before half an hour.

The hosts continued to put Italy under pressure in the second half, but headers from Daniele de Rossi and Pablo Osvaldo clinched all three points for the Azzurri.

Elsewhere in the group, two second-half goals and a late penalty save from Petr Cech helped the Czech Republic to a 3-1 win over Malta, their first win of their World Cup qualifying campaign. Bulgaria drew 1-1 with Denmark to stay second in Group B.

Zlatan Ibrahimovic spared Sweden's blushes as they came from a goal down to beat the Faroe Islands 2-1 in Group C.

The Faroes, playing on their new artificial pitch for the first time, stunned their more celebrated opponents on 57 minutes but goals from Alexander Kacaniklic and a 75th-minute winner by Ibrahimovic changed the game. Elsewhere in the group, Kazakhstan held Austria to a 0-0 draw.

In Group D, leaders Netherlands coasted to a comfortable 3-0 victory over lowly Andorra thanks to goals from former Tottenham midfielder Rafael van der Vaart, Klaas-Jan Huntelaar and Ruben Schaken. While in the same group, Romania won their third consecutive qualifier with a 1-0 victory over Turkey in Istanbul. Gheorghe Grozav scored the only goal of the game on the stroke of half-time.

In Group E, leaders Switzerland were held to a 1-1 draw by Norway, allowing Iceland to draw level at the top of the table with a 2-1 victory over Albania. In the same group Slovenia beat Cyprus 2-0.

Israel thrashed Luxembourg 5-0 in Group F, while Slovakia remain in control of Group G after a 2-1 win over Latvia. Lithuania beat Liechtenstein 2-0 in the same group.

Pedro Rodriguez scored a hat-trick as Spain coasted to a resounding 4-0 victory over Belarus in Group I. The World and European champions led 2-0 at half-time thanks to Pedro and his Barcelona team-mate Jordi Alba. Pedro scored twice more after the break as Spain drew level with France at the top of the table.