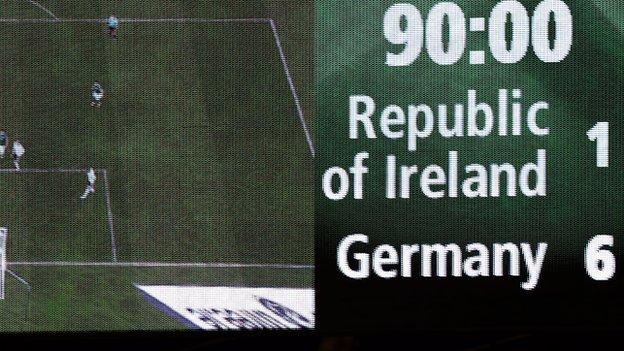 Giovanni Trapattoni admitted the Republic of Ireland were now battling for second place in their group after a humiliating 6-1 defeat by Germany.

"They are top of the group now and I believe they will finish top," said Trapattoni whose side are away to the Faroe Islands in Group C on Tuesday.

"We were not able to contain Germany in midfield. They were superior physically and technically.

"Now we must look forward - to Sweden, Austria and the other teams."

The 73-year-old manager headed into what was always likely to be an intensely difficult World Cup qualifier with question marks hanging over his ability to take Ireland forward.

His band of critics will have increased markedly in number after Friday's capitulation in Dublin.

Trapattoni said there were no excuses but did point to the absence of injured players Robbie Keane, Richard Dunne, Sean St Ledger and Glenn Whelan.

He admiited: "Germany were far superior. Our first 30 minutes were good but after the first goal they showed how superior they are."