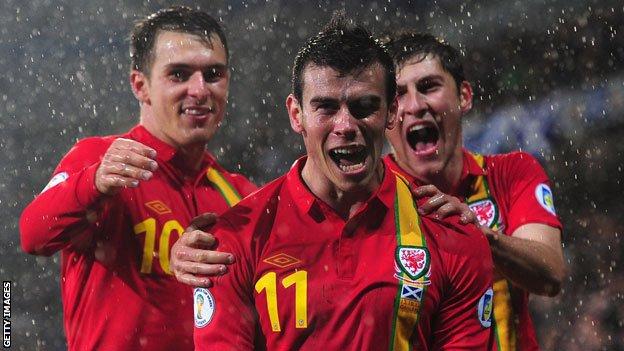 Welsh hero Gareth Bale is confident Wales' 2-1 win against Scotland can spark a successful bid for a place at the 2014 World Cup.

The Group A qualifying win was the nation's first in five starts under manager Chris Coleman.

Bale spectacularly sealed victory a minute from the end.

"We needed it - it's a kickstart to our campaign. Hopefully it can inspire us now for the matches ahead," said the Tottenham Hotspur winger.

Victory ensured Coleman avoided becoming the first Wales manager to lose five successive games at the start of his tenure.

His side now travel to Croatia - who beat Macedonia 2-1 on Friday - for another crucial encounter on Tuesday.

We showed great belief, great character and great strength and got what we deserved

Wales lie fourth on three points going into that game, having climbed from bottom to rise above Scotland and Macedonia.

Croatia lie second on goal difference behind Belgium, who have seven points from their three games, with Serbia third.

Against Scotland, Wales fell behind to James Morrison's first-half strike before Bale's penalty brought them level.

Bale then gave Wales victory as they sought redemption from the 6-1 drubbing by Serbia that preceded Friday's encounter, having kicked off their campaign with a 2-0 loss to Belgium.

"We all knew coming in that it was a massive game for us," said Bale. "We let ourselves down as well as the nation last time out.

"We went a goal down but we fought back like men and it was a great result."

Bale unleashed a brilliant 25-yard left-foot shot that curled into the top corner to seal the win.

He said: "There was a bit of space in front of me, I drove into it and no-one closed me down. Some go in and some don't."

He also highlighted Bale's "massive performance", adding: "People will talk about the winner, which is a great goal, but when we are 1-0 down in a home nation derby and we have lost the last few games, to step up and take the penalty - it was a great execution, nice and composed.

"He keeps on producing swashbuckling performances and doing things that not many other players are capable of doing.

"He's a special player, we all know that, and if you think, he is 23 - he has not even peaked yet. He is an amazing player.

"Overall, [given] the performance over 90 minutes, if we had come away with nothing it would have been a travesty."

Even so, Coleman sympathised with Scotland manager Craig Levein amid controversy over a disallowed Steven Fletcher goal that would have made it 2-0 to the visitors.

But Coleman added: "Over the course of 90 minutes there is always going to be a bit of controversy."

Having secured the win, Coleman believes the mood in the Welsh dressing room will alter significantly.

He said: "This will give [the players] confidence.

"You can start feeling sorry for yourself, thinking 'this is never going to happen' or 'we are unlucky again' or 'it is not our time' or whatever.

"We just kept going. We never panicked or kept knocking it long.

"They couldn't have reacted any better. I thought they were magnificent and deserved it."