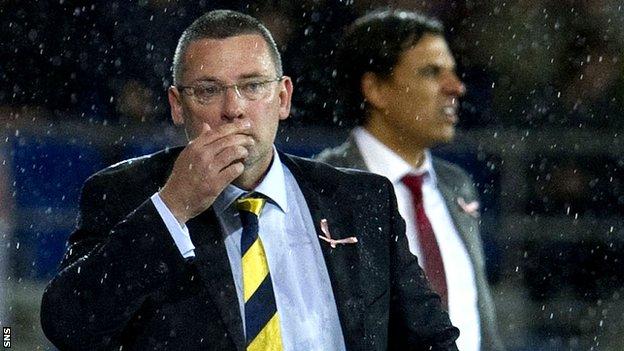 Craig Levein admits Scotland's World Cup qualifying hopes rest on winning in Belgium on Tuesday but says he has no thoughts of quitting as coach.

"Leaving? No chance," he said of his own job after the

"It's a job I really want to do. I love doing it and it's important that we pick ourselves up and go again.

"It leaves us needing to win the game on Tuesday, that's for sure. It is a difficult task, but it's a different game altogether on Tuesday."

James Morrison had put Scotland ahead at half-time in Cardiff, but two goals in the last 10 minutes from Gareth Bale gave Wales their first points in qualifying Group A.

It leaves the Scots second bottom of the table, five points adrift of Belgium, who were convincing 3-0 winners in Serbia, and Croatia, who won 2-1 in Macedonia.

"It was a sickener first and foremost," Levein told BBC Scotland. "I just could not see us losing the game.

"It is a real blow to us, and the lads are absolutely devastated.

"Admittedly, in the second half, we maybe went too much back to front.

"I think the 1-0 lead made us a little bit edgy and that second goal was crucial and we just didn't manage to get it."

However, Levein was not yet ready to concede that Scotland could not qualify for the finals in Brazil.

"With 10 minutes to go before the penalty is given, we're sitting in a good position," he said.

"A victory tonight would have made it a little bit easier - even a point would have been worthwhile on Tuesday - but I think now we've got to go and try to win the game."

The Scots had a goal ruled out when Charlie Adam's cross was ruled to have gone out of play before being headed in by Steven Fletcher.

That, plus the decision not to show Wales midfielder Aaron Ramsey a second yellow card, angered captain Darren Fletcher.

"We scored a perfectly good second goal to make it 2-0 and I think the game [would have been] over at that point," he said.

"I've seen footage and it doesn't look like it's over the byeline.

"Ramsey is on a second yellow card and dives in the box, so another yellow and he's off as well.

"I just couldn't see us losing the game after being 1-0 up.

"But we've lost the game and it puts us in a difficult position now."

"There is a lot of anger from the boys because we wanted to do something for the manager," he said.

"We were together as a team and we were confident we could get a result.

"There's still hope, but it is an uphill battle. Many people won't fancy us in Belgium and, if we can nick three points, we are back in it.

"The players are behind the manager and that's the most important thing.

"The manager picked the team that everyone wanted, but we switched off twice and lost the match."

Television footage suggested that Bale had tripped over his own feet in winning the penalty from which he scored the opener, but Shaun Maloney admitted that he clipped the Tottenham Hotspur midfielder.

"I accept responsibility for conceding the penalty," the Scotland midfielder said.