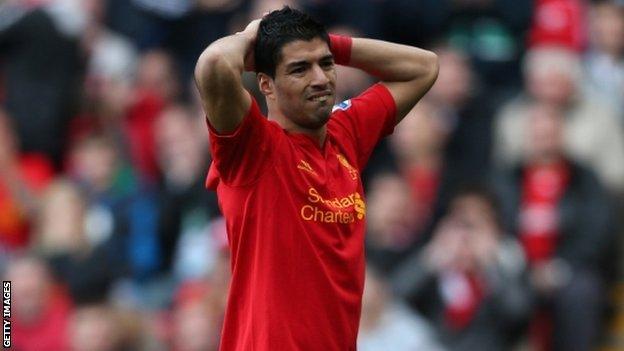 Liverpool striker Luis Suarez has said Fifa vice-president Jim Boyce just "wanted to get publicity" with his remarks about the Uruguayan.

Boyce said an incident involving Suarez in the Reds' game against Stoke was "nothing less than cheating" and called simulation a "cancer" in the game.

"I don't know why he has been talking about me. He certainly can't be well-known and he wants to get publicity."

The 25-year-old who played for his country in Friday night's 3-0 World Cup qualifying defeat by Argentina, went on to tell Argentine radio: "Let him carry on talking. My job is to play football and to try to do so in the best way possible.

"What he has said does not affect me. I am not interested in what he has to say. It's been important to have the support of the Uruguayan FA and the people.

"I have lived through a lot in the past year, with people saying things about me, but I have continued playing and proving my job is what happens on the pitch."

Boyce's remarks prompted the Uruguayan Football Association (AUF) to write to Fifa defending their player and demanding that the 68-year-old Northern Irishman, who is Britain's representative on Fifa, be referred to the governing body's ethics committee.

The letter, signed by the organisation's president Sebastian Bauza and general secretary Anibal de Olivera, described Boyce's remarks as "at odds with the principles of world football governing".

It continued: "The code of ethics of Fifa, in its article three, clearly states: 'Officers should be aware of the importance of their role and the obligations and responsibilities that entails.'

"Deliberately ignoring his position and role, Mr Boyce has referred specifically to a football player, encouraging and provoking hostility towards him."

The letter also included a list of six steps the AUF wants Fifa to take, including withdrawing its confidence in Boyce and expressing its regret to Suarez.