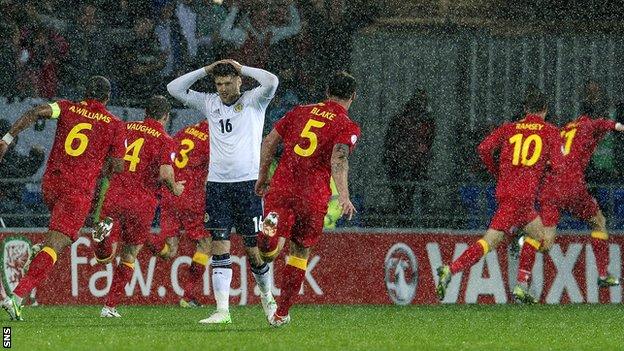 Christophe Berra is calling for Scotland to draw inspiration from their 2007 win in France as they prepare to take on Belgium on Tuesday.

Five years ago, a fantastic goal from James McFadden and a stubborn defensive display earned the points in Paris.

"Belgium are a top team with world class players but we've done it before - we won in France," said defender Berra after the 2-1 loss in Wales.

"When our backs are to the wall, we always seem to bounce back."

The defeat in Cardiff leaves Scotland with just two points from three games in World Cup qualifying Group A.

Belgium, who won 3-0 in Serbia, top the table on seven points, along with Croatia.

Coach Craig Levein said that his team's qualifying hopes rest on winning in Brussels, adding that he has had no thoughts of quitting his post.

Shaun Maloney insisted that the players were behind their coach and acknowledged that the chances of reaching Brazil in 2014 have been badly damaged.

"You have to go into every game with hope, but there obviously has to be a vast improvement in the results for us to have any chance of qualifying," said the Wigan man.

"Tuesday's game is arguably the hardest game in the group for us, so it's going to be very difficult for us to win.

"We have to go with a plan for stopping Belgium and trying to take the three points or a draw."

Reflecting on the defeat to a late double from Gareth Bale, Berra and Maloney shared the frustration of Levein, who was furious with the performance of the match officials.

Steven Fletcher - back in the side for the first time in over two years - thought he had doubled the visitors' lead in the second half when he headed in Charlie Adam's cross.

However, the effort was disallowed, with the delivery adjudged to have gone out of play - despite replays suggesting otherwise.

Bale equalised from the penalty spot on 81 minutes after it was deemed he had been fouled by Maloney, and then smashed in a wonderful winning goal.

"We should have won that game," said Berra. "I don't know how we got beaten to be honest.

"We had chances to kill them off and Steven Fletcher's goal should have stood.

"Second half, Wales had a bit more of the ball, but they were never cutting us open.

"Gareth Bale is world class - but for the second goal too many of us switched off and you can't give that sort of player 10 or 15 yards to run into and have a pot at goal."

Bale's tumble to win the penalty appeared to come as a result of the player tripping over his own feet, but Maloney dismissed any suggestion of cheating from the man-of-the-match.

"I don't think it was a dive," he told BBC Scotland.

"He's just ran across me and there was contact. I don't think I made a challenge but it's one of these things when a penalty can be given.

"Second half, we didn't play as well as we could but it felt that the effort was there. It's just disappointing not to get a result for the manager and the fans."