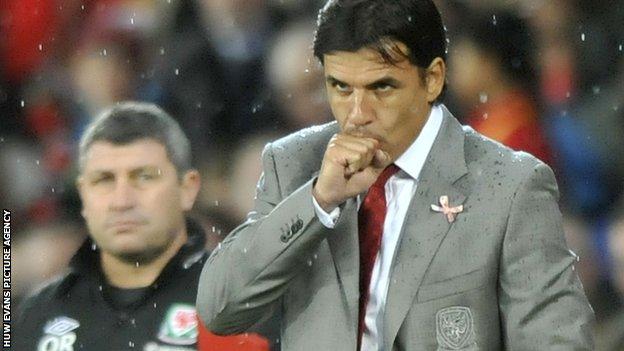 The former Fulham manager had been under pressure after defeats in his opening four games in charge.

"Every time I win as a manager, I don't celebrate - I'm relieved," Coleman said.

"That is how we all think, any manager I talk to.

"It's great that that is my first victory after I lost two friendlies and two qualifiers, and in the last one, took a hiding.

"It is my first time tasting success as an international manager.

"But I am the same manager now as I was before. I won't change, and I'll be the same again over the next few days."

Wales had been trailing to a 27th minute goal by James Morrison before Gareth Bale struck twice in the last nine minutes.

The Tottenham winger scored from the penalty spot after the referee deemed he had been fouled by Shaun Maloney.

And Bale completed the comeback with a brilliant 25-yard left-foot shot that curled into the top corner with a minute of normal time remaining.

Coleman revealed Aaron Ramsey, replaced as captain by Ashley Williams, had stepped aside to let Bale take the spot-kick.

"Aaron normally takes them, but I think Aaron thought 'Baley is on fire and playing with confidence', so he gave the ball to Baley," Coleman said.

"It has been a tough week for Aaron because I took the captaincy off him,

"But I think he understood my reasons for it, and his response couldn't have been any better."

Ramsey will miss Tuesday's game in Croatia through suspension after picking up his second yellow card of the campaign against Scotland.

Coleman has now turned his attentions to the next game in Osijek against the second placed side in Group A.

"We have to go to Croatia and that is the next task. I won't be thinking about the Scotland game or patting myself on the back," Coleman added.

"I'll be thinking 'right, what do we have to do on Tuesday - can we get a result in Croatia against a good team?'"