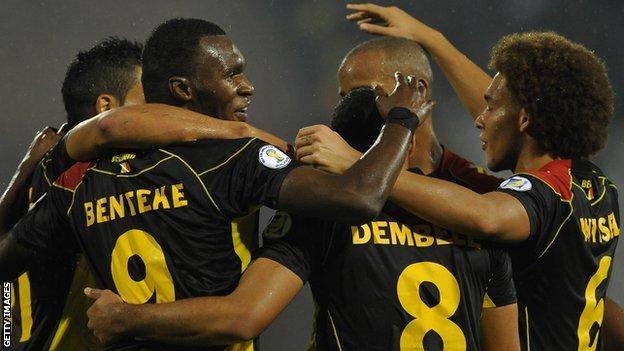 Belgian Thomas Buffel believes his country will not be getting carried away, despite their rise to the top of World Cup qualifying Group A.

Scotland face Belgium in Brussels on Tuesday with Craig Levein's side still looking for their first group win.

And 35-times capped Buffel insists the hosts will not be complacent.

"Obviously they are confident but they keep calm and know that there are still a lot of games to play," the former Rangers player told BBC Radio Scotland.

"It's a really good start of the national squad and we are very happy with this.

"How the squad reacted to a difficult start was great. To start with seven points from nine is really good.

"We still need to be alert."

Belgium and Croatia have taken seven points from the opening three qualifiers but the Belgians have a superior goal difference, helped by Friday's 3-0 victory in Serbia.

And, boasting an array of talent that includes Vincent Kompany, Thomas Vermaelen, Jan Vertonghen, Moussa Dembele, Eden Hazard and Kevin Mirallas, Buffel feels the current generation have the potential to reach the 2014 finals in Brazil.

"After the [World Cup finals] campaign in Japan [in 2002], it was difficult to qualify for two or three tournaments but they just kept calm and tried to build a new team," added Buffel.

"Young talent came through but they didn't have the experience. Now, we are a few years later and everything's starting to click.

"We have a lot of talent even if we miss some players we can adapt and that's a big advantage.

"They all play for big clubs and they are important players for these clubs as well. This generation is big and hopefully we can qualify for Brazil.

"Belgium have enough talented and skilful players who can change the game in seconds with an action or a combination and that's a big advantage."