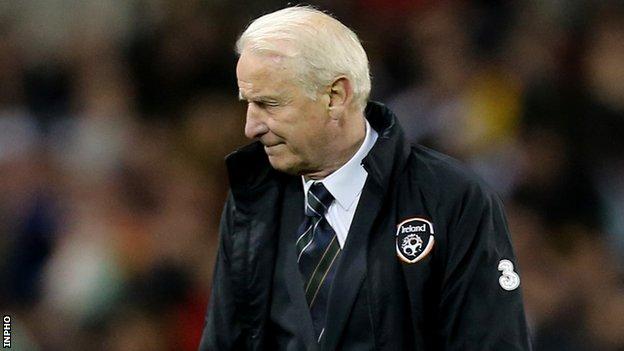 Republic of Ireland manager Giovanni Trapattoni has insisted that he will stay on in the job despite Friday's 6-1 World Cup qualifier humiliation by Germany in Dublin.

Pressure is mounting on the Italian, but the 73-year-old maintains that he has the confidence of his squad.

"We give them jobs and we have a system to get goals, and the players believe in this," added Trapattoni.

"The team tries to do what we ask and they are also happy to do it."

Trapattoni was greeted by scathing headlines in the Irish media on Saturday after the country's heaviest ever home defeat in a competitive international.

Several pundits criticised an apparent lack of spirit in the Irish side as the Germans were able to stroll to victory in the Group C clash at the Aviva Stadium.

However, Trapattoni, whose annual salary is in the region of £1.2m, insists that he is solely focusing on Tuesday's qualifier in the Faroe Islands rather than mulling over his future.

With the Italian under contract until the end of the current qualifying campaign, the cash-strapped Football Association of Ireland could struggle to come up with a severance package if they did decide that he should go.

But Trapattoni was showing no sign of falling on his sword in Saturday's news conference in Dublin.

Asked what would make him consider his future, he replied: "When there is no positivity, when I ask the team to do something and they do not do it."

The Irish have lost four of their last five competitive games and the nightmare Euro 2012 showing has now been followed by one of the most embarrassing nights in the country's football history.

However, Trapattoni responded to those facts by vowing to stay on in the job on Saturday.

"There are other managers who wish to go, but we have done our job very well and we want to continue," added the Italian.

We have to win and we will look to win

Trapattoni spoke of his attempts to rally his deflated players after Friday's hammering.

"I told them that when you lose, conceding on goal or six goals or three goals, it's the same," he added.

"It's three points gone, it only changes the psychological situation.

"I reminded them that when they play at their clubs and they lose a game, they often have another one after three days and they have to start again for that next match with the same enthusiasm and immediately forget the defeat."

The Republic boss added that the Faroes clash offers his players an immediate chance to redeem themselves.

"Our target is not Germany, our target is Sweden and Austria, and in the next game, the Faroes.

"We have to re-charge the batteries and focus on the next match in the Faroes on Tuesday.

"We have to win and we will look to win."

The Republic travel to Torshavn on Sunday but it is not clear if skipper Robbie Keane will be with the squad after missing Friday's game because of an Achilles injury.