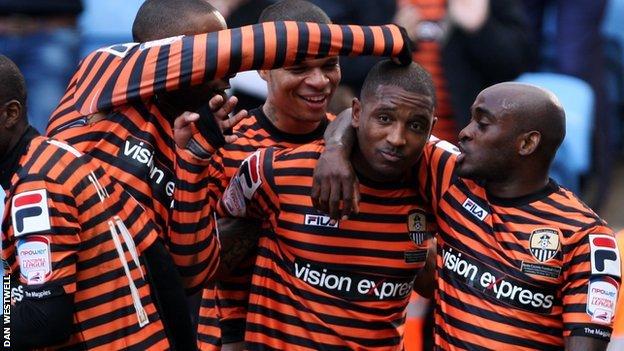 High-flying Notts County extended their club record unbeaten away league run to 14 games with a 2-1 win at Coventry.

Andre Boucaud's 30-yarder into the bottom corner gave the Magpies a 39th-minute lead against the run of play.

Richard Wood pulled one back with an 88th-minute header from a John Fleck corner, but it could not prevent the Sky Blues' first defeat in five games.

Lee Hughes was booed after coming on as a second-half substitute for Notts, returning to Coventry for the first time since he was jailed for his involvement in a fatal car crash near the city over eight years ago.

"We'd have liked to have had the rub of the green. You've got to credit Notts County because they threw their bodies in front of the ball, but we created enough chances to win.

"The goal from Richard Wood was a great header to get us back into it, but it was too little, too late.

"We could have won. We need to be braver. They put us under pressure, but there were gaps there we could have exploited and we were a little bit lacklustre with our passing.

"At times, we're really naïve. We're a fairly young squad, but when we come up against senior professionals like that they know every trick in the book, and that little bit of experience told."

"The away support was again fantastic and very vocal. They have a team to be proud of.

"We had to dig in at times during the game and we did that."