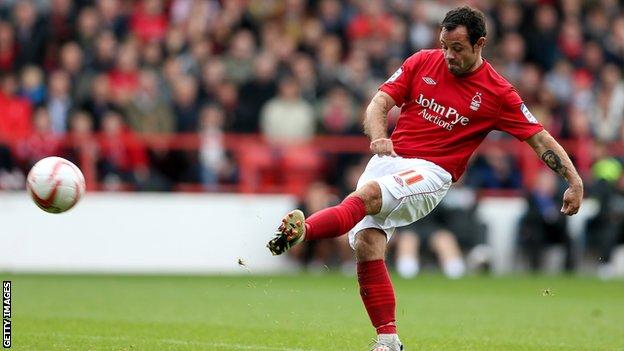 Two goals in just over a minute set Nottingham Forest to victory over a subdued Cardiff City.

Andy Reid scored the Forest opener with a 20-yard free-kick and Daniel Ayala doubled the lead almost immediately from the restart with a bullet header.

Cardiff were again asleep from a kick-off as Billy Sharp pounced to score 75 seconds into the second half.

Cardiff, who drop form top spot to second place on goal difference, finally came to life in the closing stages, but their early lethargy gave them too much to do as they searched in vain for an unlikely comeback.

Forest took their limited chances well and only ever looked ruffled when the Bluebirds piled bodies forwards in desperation at the end.

It was a far cry from the first half when Forest ensured almost total dominance with two quickfire goals.

Reid scored the opener on 25 minutes when he floated a left-foot 20-yard free-kick delicately into the top corner, hitting the underside of the bar on its way in.

The old adage states that a team is at its most vulnerable just after scoring, but it was Cardiff who were caught napping as Forest scored an immediate second.

Greg Halford delivered a tempting cross into the penalty area, where Ayala rose unchallenged to power a header past a helpless David Marshall for his first goal of the season.

Cardiff were kept waiting for Forest to return to the pitch for the second half, and the visitors seemed to have lost all focus as Sharp scored within seconds of the restart.

The striker was faced with an acute angle as the ball fell to him in the box, but he slide the ball expertly underneath Marshall.

Cardiff, who were searching for a fourth successive victory, finally offered some attacking threat with the introduction of Craig Noone and Rudy Gestede - and Helguson's goal arrived 10 minutes later.

The lone striker had been shackled for most of the game by the commanding Forest centre-backs, but he used his strength to find some space in the six yard box to stab the ball past Camp.

The goal suddenly gave Cardiff belief, and they were denied a second when Tommy Smith hit the foot of the post.

Guedioura's sending off with six minutes remaining gave the visitors further encouragement, but Camp ensured Forest avoided a nervy end with a superb save from Gestede's header.

"We scored good goals today. Andy Reid has been scoring goals like the one he did today throughout his career and it came at a good time.

"To get the second goal in a second phase with an excellent cross and header was very pleasing.

"It was a game of two halves really. To be leading 2-0 is a dangerous scoreline in the Championship, 3-0 was dangerous as well to be honest.

"Cardiff went more direct and were fighting for a lot of balls on the edge of our box but we dug in and won the game on the strength of what we did in the first half."

"We lost goals at crucial times today and you can't concede the kind of goals we did today and expect to win games.

"We couldn't do much about Andy Reid's free-kick but the other two goals were basically defensive errors and something we have to look at.

"The second goal gave Forest breathing space and when they got the third it gave us a mountain to climb.

"To be fair to the players they had a go at it and had 13 attempts on their goal in the second half. Tommy Smith hit the post and we had a couple of efforts blocked on the line so on another day we might have got something from the game."