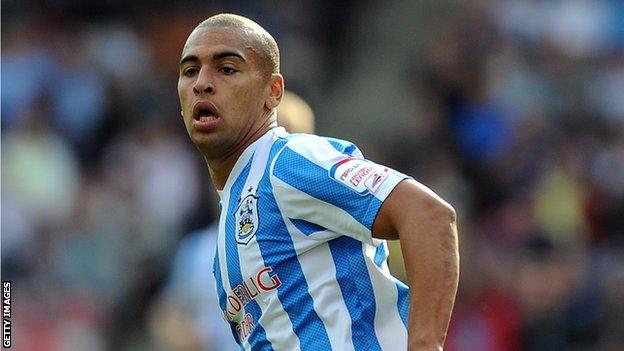 James Vaughan and Jermaine Beckford scored as Huddersfield defeated Wolves to move up to third in the Championship.

Vaughan put the home side ahead in the 10th minute, heading home at the back post.

Beckford made it 2-0 when he struck a stunning volley from Adam Clayton's cross beyond goalkeeper Carl Ikeme.

Sylvan Ebanks-Blake's close-range finish in the 63rd minute set up a tense finish, but Huddersfield held on.

Wolves arrived at the John Smith's Stadium having won their last three games away from home.

Huddersfield, meanwhile, had lost their last two on home soil.

But from the outset the home side's on-loan duo of Vaughan and Beckford caused Wolves all sorts of problems and it was the former who opened the scoring.

Jack Hunt raced down the right before floating a cross towards the back post where Vaughan was waiting, and the Norwich man nodded home.

There was little the visitors could have done about Huddersfield's second just before the half hour mark as Beckford smashed a volley beyond Ikeme from 12 yards for his second goal in as many games.

Huddersfield had plenty of chances to go further ahead after that, but instead it was Wolves who pulled one back in the 63rd minute.

Bakary Sako crossed from the left and Ebanks-Blake poked beyond Alex Smithies at the near post.

Wolves dominated after that as they sensed the possibility of an equaliser, but Huddersfield held on to secure the three points.

Huddersfield manager Simon Grayson: "James Vaughan and Jermaine Beckford can be whatever they want to be. Both have something to prove, both to themselves and other people.

"Without wanting to jinx it, as a pair, they have plenty of credentials to suggest they could be one of the best in the league.

"Playing like that they will be a handful for teams in any league."

Wolves manager Stale Solbakken: "Huddersfield scored two very good goals and they really punished us with some class finishing. You have to praise the opposition sometimes.

"I can also find faults with my own players but sometimes you have to compliment the opposition.

"We gave ourselves a long way to come back after going 2-0 down but we did much better in the second half.

"It may be that we slipped below our normal standards but Huddersfield were very good."