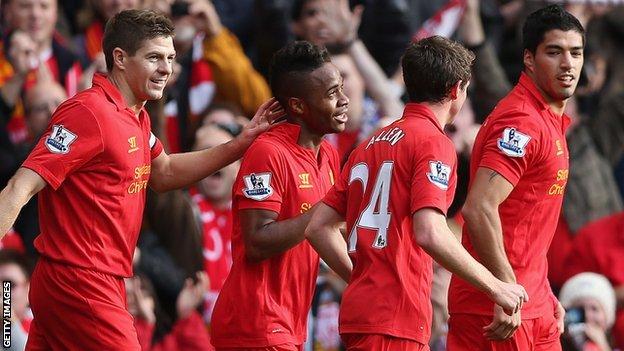 Sterling, 17, delivered a virtuoso display as Liverpool recorded only their third home league win of 2012 to move into 11th place in the Premier League table.

In scoring the game's decisive goal, Sterling became the second youngest Liverpool player to find the net in the Premier League, behind former England striker Michael Owen. He left the field to a standing ovation with five minutes remaining.

But Rodgers' side should have won far more comfortably, spurning a host of chances during a game they totally dominated.

There was a clear feeling of unease among the home support as the game wore on, with Liverpool fans scarred by previous failures to convert possession into points.

On this occasion they stood firm, but a worrying lack of ruthlessness in front of goal could have cost them against more experienced sides.

The week had begun with Liverpool announcing their intention to extend a 120-year love affair with Anfield - but a quick glance at their home record in 2012 was clear evidence that the famous old ground is not the bastion of invincibility it once was.

Coming into this game Arsenal had won as many Premier League matches at Anfield this calendar year as the Reds and Rodgers, appointed at the end of May, was still searching for that elusive first home victory of his reign.

Sterling delivered a commanding performance. His attacking play was rapier sharp, his finishing ruthless and his interplay with Luis Suarez and willingness to take up more central positions gave Liverpool a cutting edge they too often lacked.

"Liverpool's lack of cutting edge was exposed again. Raheem Sterling grabbed their winner but they created a number of other chances but couldn't score again. Reading had chances themselves in the second half and might have felt they might have nicked a point."

The winger's combinations with Glen Johnson down the left flank led to a series of chances for the England full-back, none of which he could convert, and Sterling also surged beyond defenders to carve out chances for Nuri Sahin and Suarez before snatching his goal.

A header ran to Suarez near the halfway line and the Uruguayan striker's neat flick sent Sterling scampering clear. Two touches later the ball was in the back of the net as the England Under-21 international fired a fierce shot across goalkeeper Alex McCarthy.

Liverpool's dominance continued into the second half but the longer the score remained at 1-0 the more Reading grew in confidence and Brad Jones - deputising for Pepe Reina as the Spaniard missed his first league game through injury for more than six years - twice denied the visitors as nerves built at Anfield.

However, the home side continued to dictate and Suarez, battered and bruised from a first half in which referee Rodger East did little to protect him from a number of robust Reading challenges, saw a low shot scrambled to safety by keeper Alex McCarthy before turning Sterling's crossed high over the bar.

Reading threw on Jason Roberts in an attempt to snatch a point and Liverpool survived a series of nervy moments as Adam Le Fondre went close and Roberts fought for every ball.

Such was the tension, the final whistle was greeted with an overwhelming sense of relief in the home dugout and among the home support.