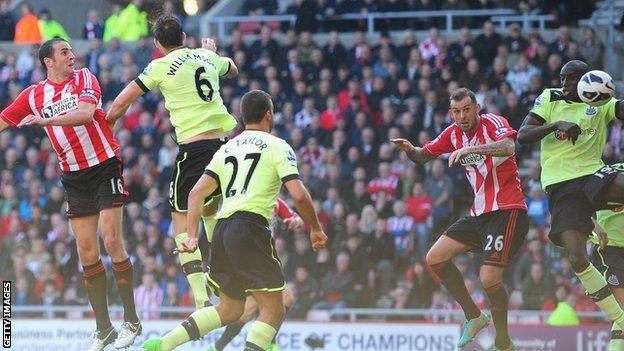 Demba Ba's late own goal rescued a point for Sunderland against 10-man Newcastle United in the North-East derby at the Stadium of Light.

Newcastle successfully protected Yohan Cabaye's third-minute goal until four minutes from time - despite having Cheick Tiote sent off midway through the first half for a high challenge on Sunderland striker Steven Fletcher.

Sunderland's response to their numerical advantage was desperately poor and lacked any semblance of real creation until Seb Larsson's free-kick was headed on to Ba by John O'Shea, a crucial deflection that wrong-footed Newcastle goalkeeper Tim Krul.

The Black Cats then pressed forward for a late winner but a point was the least Newcastle deserved for the way they remained organised and kept Sunderland at arm's length despite losing the influential Tiote, with defender Fabricio Coloccini magnificent.

It was only when the Argentine succumbed to cramp late on that Sunderland applied any real pressure on Newcastle to force the equaliser.

Magpies manager Alan Pardew clenched his fist to their travelling fans at the final whistle but he may even be disappointed at not holding out for what would have been a memorable victory.

Sunderland have now won only one of their last 16 games against their local rivals and they rarely looked like improving that record until that late rally.

"Newcastle went in front early on through Yohan Cabaye and were down to 10 men early on after Cheick Tiote saw red. Sunderland had to wait until the 86th minute to equalise but I should think neither camp will be particularly happy with just getting the one point in the overall context of the match. Far from a classic derby but generally quite a typical one."

In a predictably fevered atmosphere, the visitors' nerves were settled and Sunderland's anxiety increased as Pardew's side struck early.

Ba's shot was turned out by the feet of Sunderland keeper Simon Mignolet and Cabaye arrived in a crowded penalty area to drive home a low finish.

Sunderland struggled to find any composure, in sharp contrast to Newcastle's more measured approach, and Cabaye was a threat once more as his long-range shot was turned over by Mignolet.

The atmosphere inevitably placed this game permanently on the edge and it boiled over after 25 minutes when Tiote was sent off by referee Martin Atkinson. He had already won a free-kick after being pulled by Jack Colback but left his foot in high on Fletcher and Atkinson swiftly produced the red card.

Sunderland, whose attempts to bring Adam Johnson's talents to bear had been frustrated by close marking, were buoyed by Newcastle being reduced to 10 men, but the visitors were still the better side.

Johnson did escape the constant attention to send a curling shot wide and Craig Gardner was narrowly off target - but even with only 10 men Sunderland failed to seriously test keeper Tim Krul in the first half.

Newcastle did make an adjustment after Tiote's sending off, introducing James Perch for Shola Ameobi, and they almost snatched a second as half-time approached but Ba sent a bicycle kick wide from eight yards.

The hosts made no further headway after the break and it was no surprise when O'Neill introduced Louis Saha for the ineffective Stephane Sessegnon just after the hour.

There was a rare moment of anxiety for Newcastle with 19 minutes left when Krul failed to cling on to James McClean's cross but Coloccini was once more perfectly positioned to rescue his keeper.

Newcastle had been content to play a game of containment, and did it quite successfully, but they almost snatched a second on the break when Ba raced on to Cabaye's pass but could not get proper contact on his finish.

As the game entered its last 10 minutes Sunderland finally fashioned a clear opportunity but Saha could only volley into the side-netting at the far post.

Newcastle's grip on the game had loosened after the departure of Coloccini through injury, the arrival of Steven Taylor producing a predictably hostile reaction after his public claim that no Sunderland player would get into the Magpies team.

And it was amid such confusion that Sunderland finally got the break with four minutes left. Larsson's free-kick headed on to Ba by O'Shea, leaving Krul wrong-footed and ensuring the points were shared.

"We were knocked back by the early goal which gives them a massive lift. They were very strong in the initial part of the game and then they had the man sent off.

"Numerically, we should be able to use that better but I thought at that stage we became a bit anxious. In the second half it was just the sheer pressure that led to the equalising goal. Newcastle played excellently with the 10 men.

"I must admit, slog or not, the noise that erupted from the stadium when we equalised was something that I will not forget."