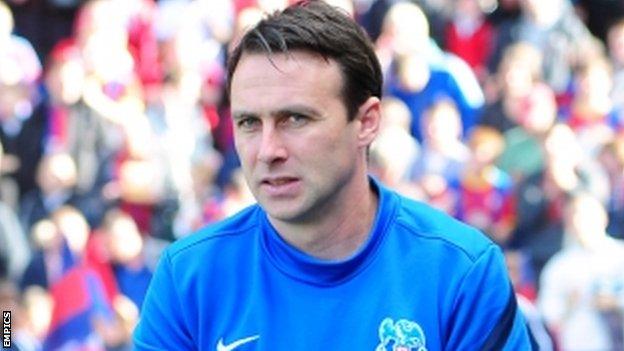 Palace raced into a 2-0 lead through Mile Jedinak's 30-yard drive and Damien Delaney's header shortly after.

Millwall were handed a lifeline when Dean Moxey was dismissed for handling a goalbound shot, with Liam Trotter converting the resulting penalty.

And they made their numerical advantage count when Mark Beevers bundled home.

Victory in the early kick-off at Selhurst Park would have helped Palace climb briefly level with Championship leaders Cardiff.

There were 11 bookings in a typically feisty derby, and Palace could have been reduced to 10 men in the first half when Peter Ramage tripped Darius Henderson but referee Phil Dowd waved play on.

Palace soon went ahead in spectacular fashion when Jedinak collected the ball 35 yards out and unleashed a fierce, swerving shot which flew past David Forde and into the net.

They doubled their advantage when Owen Garvan crossed in a free-kick and Delaney glanced a header past Forde.

But when Moxey punched Henderson's header from underneath the crossbar to earn a red card, Trotter calmly rolled in the penalty.

And Beevers grabbed a point for Millwall when he diverted the ball into the net with his thigh on only his second appearance for the Lions.

Crystal Palace boss Dougie Freedman: "Only Dean can tell you what he was thinking at the time, but it looked instinctive [Dean Moxey's handball on the line for which he was sent off].

"I'm sure if he had his time over again he'd let the ball go into the net and we could have gone on to win the game with 11 men.

"Unfortunately he didn't get too much sympathy at half-time, we had to regroup and be mentally strong as we were a man down.

"I didn't think they opened us up in the second half. I was disappointed to concede from a corner but I'm reasonably happy with a point."

Millwall boss Kenny Jackett: "I was very pleased with my players coming back from two down away from home. It was a good achievement. We played well, showed heart, courage and no little quality.

"The second half was a dominant performance. We persevered against a resilient Palace side and got back into the game.

"It's never easy playing against 10 men. But the goal before half-time and obviously the sending-off galvanised us for what was a dominant second-half performance.

"I believe that's the first goal we have scored from a corner this season, so we need to work on that."