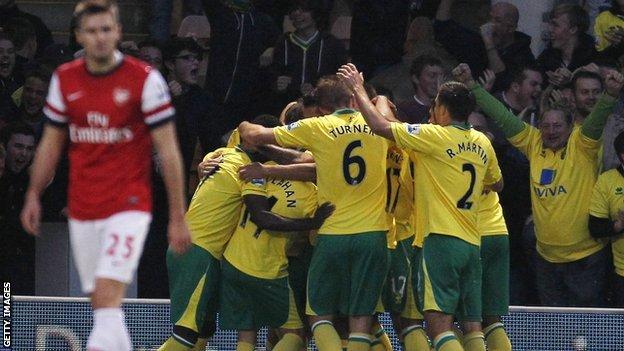 Arsenal were left 10 points behind Premier League leaders Chelsea after being stunned by Norwich, who won their first top-flight game of the season.

Grant Holt put the home side ahead when he slotted in after keeper Vito Mannone had parried Alexander Tettey's shot.

Michael Turner headed wide for the Canaries as the subdued Gunners struggled to create chances.

Mikel Arteta had a late shot saved by John Ruddy but Norwich held firm to secure the victory.

Arsenal had seen Chelsea, Manchester City and Manchester United win before their game at Carrow Road but could not match the results of their rivals as they dropped further off the Premier League pace.

Manager Arsene Wenger's desperation to shake his side out of their stupor even stretched to giving attacking midfielder Serge Gnabry, 17, his league debut, although the move proved in vain as his side suffered their first away defeat this season.

Wenger left Jack Wilshere on the bench on his return from 14 months out with ankle and knee injuries, and his side were crying out for the midfielder's guile to break down their stubborn opponents.

Norwich winger Anthony Pilkington and Gunners striker Lukas Podolski had both gone close with early long range shots before Holt, who Wenger had highlighted as having caused his side problems last season, opened the scoring.

"Arsenal have had so much possession but relatively few chances. It's not just any team Norwich beat for the first win it was Arsenal. Celebrations all round at Carrow Road."

Canaries midfielder Tettey's 25-yard shot was only parried by Mannone and Holt was quickest to react as he beat defender Per Mertesacker to the ball to poke in his third goal in as many games.

The home side had conceded nine goals in their last two matches but manager Chris Hughton clearly addressed his side's defensive deficiencies during the international break.

Norwich were more disciplined in their shape and determined in the tackle as they kept Arsenal at arm's length in a manner that was comfortable for them and worrying for Wenger.

Turner might feel he should have extended the home side's lead when he met Pilkington's corner only to head wide from six yards.

Arsenal's struggles were epitomised when Norwich keeper Ruddy pushed out a corner which fell to Olivier Giroud, who mistimed his hooked shot.

In contrast, the home side's confidence was growing as they built on their organisation by producing some promising passing play and threatening on the counter-attack.

Wenger threw on winger Alex Oxlade-Chamberlain in the hope of energising his side but he lasted just nine minutes before going off injured following a challenge by Sebastian Bassong.

Holt had a chance to put the hosts out of reach when he raced clear after capitalising on a slip by Thomas Vermaelen but the striker's ambitious chip fell straight into the grateful arms of Mannone.

Apart from Arteta's late strike and Gervinho seeing a chance disappear following a lunging Bassong tackle, Arsenal lacked any real threat as they suffered a first league defeat at Carrow Road since December 1984.

"This has been a long time coming, which our performances have warranted. However, this league is unforgiving.

"I am delighted for the team, because the work-rate was outstanding and there is no coincidence in the result.

"We could have caught them on the counter more and made life easier for ourselves towards the end, but overall we restricted them and so it was a very satisfactory performance.

"We have deserved this by our play this season so far, so it is a very good feeling to get the win here at Carrow Road for the supporters."