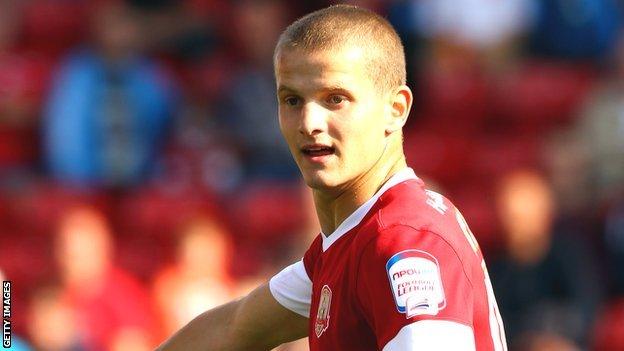 Tomasz Cywka struck midway through the second half to clinch Barnsley's second away win of the league season at shot-shy Charlton.

The Polish midfielder fired home an angled drive just after the hour mark to clinch victory for the Tykes.

It was no less than Keith Hill's side deserved as they dominated the game from start to finish.

Charlton have now failed to win any of their last five league matches and offered little in the encounter.

The Addicks have dropped to 18th in the table, just three points above the relegation zone. Barnsley are a place and two points better off.

The visitors peppered the goal in the first half without reward as Stephen Dawson, Jacob Mellis and Cywka all fired in shots from outside the area before Chris Dagnall went closest to breaking the deadlock in the 35th minute when his angled effort was well held by home goalkeeper Ben Hamer.

It was not until three minutes before the break that Barnsley goalkeeper Ben Alnwick was pressed into action when he was forced to push Dale Stephens' free-kick over the crossbar.

Charlton manager Chris Powell sent on Johnnie Jackson and Bradley Wright-Phillips at half-time to try and change the flow of the game but it failed as Barnsley picked up where they left off.

Dagnall went close again when he flashed a volley from Mellis' floated free-kick just past Hamer's right-hand post before Cywka finally broke the deadlock when he lashed home a venomous right-footed finish high into the roof of the net from 12 yards.

In pursuit of an equaliser, third Charlton substitute Bradley Pritchard fired an effort from outside the box straight at Ben Alnwick and they mustered some late pressure but it was too little too late for the home side.

Charlton boss Chris Powell: "We need to approach each home game with the belief of getting three points. But we are not doing ourselves justice.

"We always want to perform at home and get the majority of points there. We are not edgy as the crowd are with us.

"But we need to turn it around - even if that means an ugly performance as we want to pick up some points.

"You have to earn that right to win the home games. You want to win, get your season going and be consistent. We still haven't got back-to-back wins and we've been up and down. We need to resolve it quickly."

Barnsley boss Keith Hill: "The result is key but the performance is a reflection on what we have been doing most of the season.

"We could make it easier for ourselves if we converted chances. We controlled everything really. They had a bit of momentum at the end. Having the ball is key and getting it back is key.

"At the moment we have a front-door key and a back-door key."