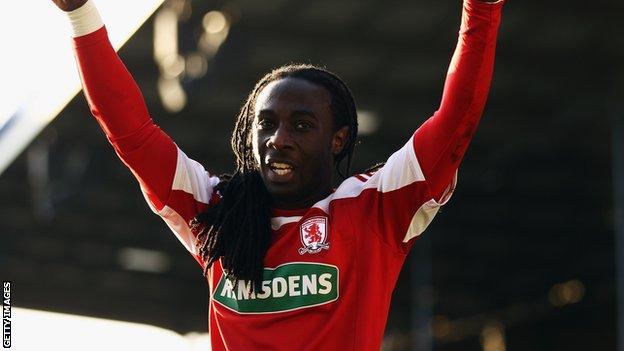 Striker Emnes, 24, saw his first-half attempt from the edge of the area take a huge deflection to wrong-foot Brighton keeper Tomasz Kuszczak.

Brighton carved out chances but Boro keeper Jason Steele thwarted Ashley Barnes with an excellent save.

Having gone top of the table after five straight league wins earlier in the season, Brighton have lost their way.

Manager Gus Poyet will be concerned his side, who netted 14 times in that winning sequenece, have only scored once in four games.

In contrast, Boro have now won their last two games.

Boro looked dangerous on the counter-attack, and Emnes silenced the home crowd by making the breakthrough with a fortunate effort.

Brighton tried to hit back and went close through a Dean Hammond header before Mackail-Smith headed over.

Brighton boss Gus Poyet: "It's painful really. Right now we are not scoring. We have the best defence in the Championship yet we can't win.

"It is up to us. It's a team problem in terms of how many chances you create. We only have ourselves to blame for not scoring.

"In our recent home games we have had chances to win easily. If the players were not trying I would be very upset. The only thing you can ask is for them to put the ball in the net."

Middlesbrough boss Tony Mowbray: "You have to prepare properly to face Brighton as they have an exceptionally good side.

"They are going to be frustrated but I'm sure they will have a good season. They will be there or thereabouts.

"We had a lot of the ball early on and Brighton came at us as the game wore on and hopefully we'll get stronger.

"The Championship is a very tactical league, there are some good coaches in it and it's not a crime to put men behind the ball."