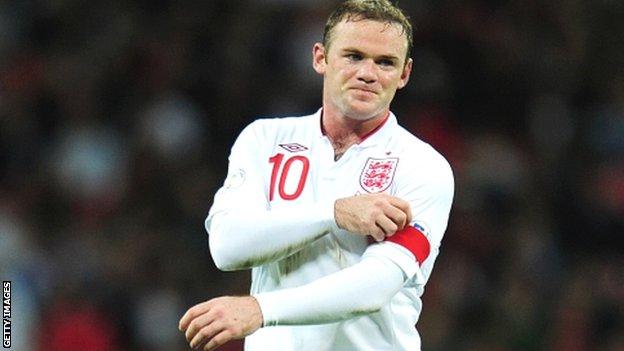 England striker Wayne Rooney says he is keen to become permanent captain of the national team one day after deputising for Steven Gerrard against San Marino.

The 26-year-old led England to victory at Wembley on Friday in the absence of the suspended Liverpool midfielder.

"As a young player, your dream is to play for England and once you do actually play, the next step is to try to captain your country," Rooney said.

"It was a great honour and hopefully one day it can be full-time."

His two goals in the World Cup qualifier took him to 31 in total, moving him above Nat Lofthouse, Sir Tom Finney and Alan Shearer to fifth in the England all-time scoring charts.

One of England manager Roy Hodgson's first major decisions was to appoint Gerrard England captain for the Euro 2012 finals in Poland and Ukraine, where the team lost in the quarter-finals on penalties to Italy.

The 32-year-old missed the San Marino match following his sending-off against Ukraine in September, but is expected to regain the armband for Tuesday's qualifier in Poland.

Another candidate to lead the side in Gerrard's absence at Wembley, veteran Chelsea midfielder Frank Lampard, 34, was ruled out because of injury.

Hodgson said: "[Rooney] was my vice-captain at the Euros from the moment he could start playing again.

"He does take playing for England unbelievably seriously. I know being captain is something he's very proud of and something he wants to do.

"Frank Lampard has captained the team when both Steven and Wayne were absent.

"But I always had in my mind that Wayne would be the vice-captain and when Frank comes back I suppose I've got a decision to make."