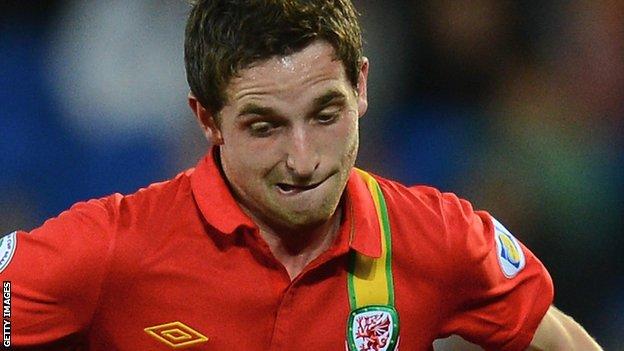 Joe Allen says victory over Scotland has given Wales belief ahead of Tuesday's World Cup qualifier in Croatia.

Gareth Bale scored twice as Wales came back to beat Scotland 2-1 in Cardiff.

Wales face unbeaten Croatia, who are second behind Belgium on goal difference in Group A.

"The belief and confidence that we'll take from this game can only help us going into a tough fixture," Allen said.

"We won't get carried away with the victory. It's a big one in terms of the group but we know we've got a big task at hand to get something from that game.

"The beauty of playing two games straight after each other, when you win the first, is a bonus.

"You can't wait to get out on that pitch once again and continue where you left off.

"If we can carry on with the level of performance then we've got every chance of getting a result."

Croatia came from a goal down to claim their second victory in the campaign with a 2-1 win in Macedonia.

Victory over Scotland at Cardiff City Stadium was not only Wales' first win in Group A but also the first win of Chris Coleman's reign.

Manager Coleman had been under pressure following the 6-1 defeat in Serbia and Allen said the players were determined to make amends against Scotland.

"The disappointment of the Serbia game was on us as players. Our performance wasn't good enough," said the Liverpool midfielder.

"We showed how much we're behind him [Coleman] and how much it means to every single player to wear the Welsh shirt."

Allen hailed the importance of match winner Bale to the national side but denied Wales were relying too much on the Tottenham Hotspur.

"I'm obviously going to be biased but for me he's up there with the very best in the world," Allen added.

"The biggest thing is he's consistent and if he keeps putting in performances like that there's no knowing how far he'll go.

"He's a key member of our squad so we know teams are going to do everything they can to try and stop a player like him.

"But any opportunity we get to give him the ball and let him do his magic then obviously we're going to do that."