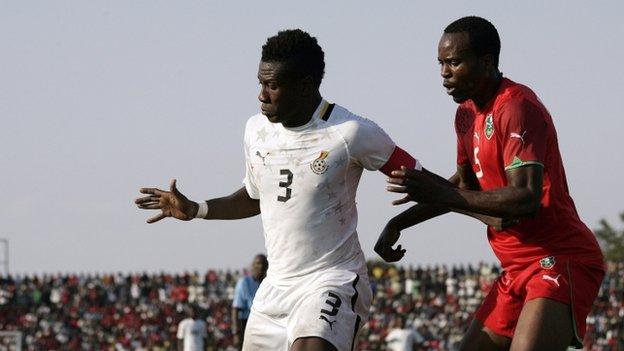 Ghana coach Kwesi Appiah has set his sights on winning the Africa Cup of Nations, having tasted success as a player when the Black Stars last won the tournament 30 years ago.

Appiah's side secured qualification for next year's tournament in South Africa with a 1-0 win against Malawi in Lilongwe on Saturday, for a 3-0 aggregate score over the two legs.

Being a coach my ambition was to try and qualify the nation to the Cup of Nations," said Appiah.

"In a tough game like this you need to take your chances and that's what we did and we were able to defend that goal to the end," Gyan said.

"Our mentality was strong today and we were able to carry the day. It was a difficult win for Ghana."

Malawi's hopes of causing an upset were dashed by that early goal - it meant they had to score four goals to go through, and they never looked like breaking the Ghanaian defence.

But the Flames coach Kinnah Phiri was upbeat, despite their exit.

"The fact is that Malawi is mostly using young players and we're building a team for the future," he said.

"Ghana is not a small team - it's a world cup team, and the way we have played against Ghana, though we have bowed out, we put up a good fight.

"And what we should do now is we have to build from where we are now."