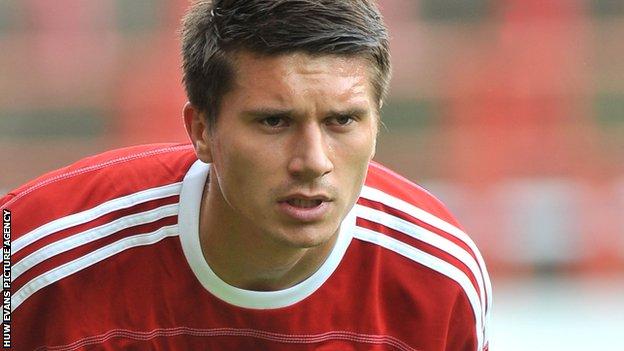 Adrian Cieslewicz says he wants to help Wrexham secure a return to the Football League after agreeing a new contract with the club.

The 21-year-old has signed an 18-month extension with Wrexham with an option for a further year.

And the ex-Manchester City trainee has targeted promotion to League Two with the Dragons.

"I definitely want to lead this club to where it deserves [to be] and I hope I can help do it," he said.

"If I left now I would feel I had unfinished business with Wrexham."

Cieslewicz was signed by former Wrexham manager Dean Saunders in 2009 following his release by Manchester City.

The Polish winger was handed a short deal during the summer but has scored three goals so far this season for the Blue Square Bet Premier side.

And Cieslewicz is grateful to player-manager Andy Morrell for handing him his first-team chance and a new contract.

"I've been working really hard to earn myself a new deal here and get my starting place in the team," Cieslewicz added.

"My contract was up in January so only had a few months so I'm obviously delighted.

"Obviously by giving me a new deal he believes in me so I want to repay him on the pitch."

Cieslewicz was in the Wrexham side who suffered only their second league defeat of the season against Lincoln City.

Wrexham remain second in the table despite a 4-2 home defeat but Cieslewicz is confident the Dragons will bounce back.

"It was a bad day at the office. We have to take it on the chin and make sure we bounce back the next game," he added.

"We've got a good squad [and] a good set of players so we know how to bounce back.

"One defeat doesn't mean a lot. We're still in the top, we've got nothing to worry, just make sure we bounce back."