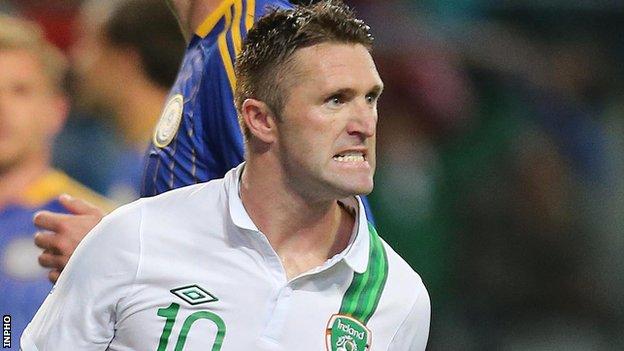 Captain Robbie Keane has been passed fit to travel with the Republic of Ireland squad to the Faroe Islands for Tuesday's World Cup qualifier.

Keane missed Friday's 6-1 humiliation by Germany at the Aviva Stadium because of an Achilles injury but is in line to return to the team in Torshavn.

However, Andy Keogh has been ruled out of Tuesday's game after suffering concussion in training on Saturday.

The Irish badly need a win against the minnows after Friday's huge defeat.

Keogh scored the Republic's late goal in the drubbing by the Germans.

Manager Giovanni Trapattoni has faced media calls to resign after the country's heaviest defeat in a competitive home game but the Italian is insisting that he will stay on in the role.

Failure to beat the Faroes would heap further pressure on Trapattoni but the Republic may not find it easy against a team that restricted Sweden to a 2-1 victory in Torshavn on Friday night.

Austria's 0-0 draw in Kazakhstan on Friday has only served to increase Trapattoni's belief that his team's last-gasp 2-1 victory in Astana last month was an important win.

"Against Kazakhstan, we played well, not badly. Have you reviewed the DVD? I have reviewed it many, many times and we deserved to win," insisted Trapattoni.

The Republic boss refused to add to the criticism directed at his players following Friday's embarrassment.

"When you fail, it is no good being angry. You have to accept Germany were superior.

"I can talk about the little details - we conceded the first goal because we let a player run in behind.

"In the past, our players have not made these mistakes, but you can forget this and concede a goal.

"I can't be angry with my players. I have to re-charge the batteries because we need their enthusiasm and their energy for the next game on Tuesday."