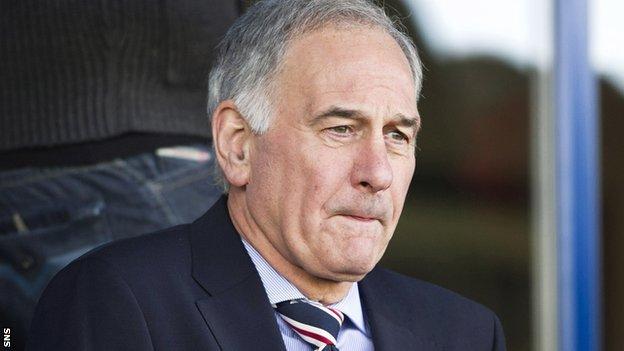 Aston Villa have reacted to Rangers chief executive Charles Green's apology for his remarks about the English Premier League club.

Green apologised after predicting a European football league and referring to Villa as "completely useless".

The Yorkshire businessman later said he had not intended to cause offence.

Aston Villa responded by saying they hoped Green would "leave the cutting remarks for those standing on somewhat stronger footing".

And he posed the question: "How can Manchester United's revenues be £320m and Aston Villa, who are completely useless, get £250m?"

The Midlands club welcomed Rangers' statement, which said: "Mr Green has sent an apology to Aston Villa saying there had been no intention to cause offence."

In response, the English club said: "Villa were surprised late last week when a Charles Green took a swipe at the club.

"Whilst admittedly bizarre and out of left field, Green did later apologise, as set out below, stating that he was aware of Villa's pedigree from a defeat of Sheffield Utd when he had worked there.

"We are hoping that going forward Green will retreat to his day job and leave the cutting remarks for those standing on somewhat stronger footing."