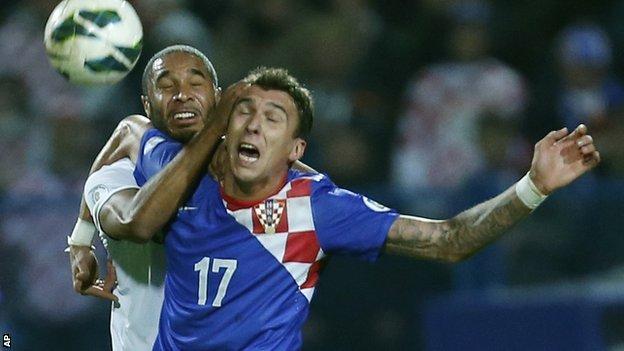 Wales' World Cup qualifying hopes took another blow after a defensive mix-up set Croatia on their way to victory.

Eduardo Da Silva doubled the lead from a yard after a rebound fell kindly.

Gareth Bale almost claimed a late consolation for the visitors, only to see Stipe Pletikosa save well, as Wales slipped to second bottom in Group A.

Wales had arrived in Osijek with their confidence buoyed by Friday's 2-1 win over Scotland in Cardiff.

Two goals from Bale, magnificent that night, had seen Wales come from behind and earn their first World Cup qualifying points after defeats to Belgium and Serbia.

That success also ended a six-game losing run and handed Chris Coleman his first success since taking over as Wales manager.

But despite the upturn in fortunes, the challenge facing Wales at the Gradski Stadium was a daunting one against a Croatia side unbeaten in this campaign - fresh from a 2-1 win in Macedonia.

Added to that was Croatia's incredible home record, having lost just once - to England in September 2008 - in 46 qualifying matches.

Darijo Srna was the first to threaten the Wales goal, curling a free-kick past the defensive wall that had goalkeeper Price plunging low to his left to turn the ball around the post.

After Bale's match-winning display against the Scots, the winger was carefully watched by the Croat rearguard.

Instead, it was his former Tottenham team-mate among the Croatia line-up, Real Madrid's Luka Modric, who was starting to run the game.

The midfielder had a penalty claim turned away by referee Alexandru Dan Tudor after Darcy Blake bumped him on the shoulder, and he then sent a strong left-foot shot into Price's midriff.

A Mandzukic volley was also beaten away by the Wales keeper, before a horrendous defensive blunder gifted Croatia the lead.

Captain Williams hit a weak backpass - albeit not helped by a puddle of mud - that put Price under pressure, which the Crystal Palace keeper compounded by hitting his clearance into the pressurising Mandzukic.

The rebound fell nicely for the Bayern Munich attacker, who gleefully side-footed the ball into the net.

If that was the bad side of the third-choice Wales goalkeeper, playing because of injuries to Wayne Hennessey and Boaz Myhill, his good reactions soon after to deny Eduardo at point-blank range kept his side in the game.

Wales' goal threat in a one-sided first half was sporadic, with the best chance a Bale free-kick fisted away by Pletikosa after Dejan Lovren had shunted clumsily into the Spurs man.

This was the first competitive match between Wales and Croatia, with the sides having played just two previous friendlies - a 1-1 draw in Varazdin in 2002 and a 2-0 win for Croatia in Osijek in 2010.

A Modric back-heel opened up the Wales defence soon after half-time and only Williams' alertness diverted Ivan Perisic's shot over the bar.

Price again saved Wales when Mandzukic seized on a long ball over the top, but from the resulting corner the home side doubled their lead.

Perisic's free header was well parried by Price, but the prone keeper could do nothing as Eduardo pounced on the rebound to stab home.

The Wales boss sent on Simon Church for the ineffectual Steve Morison and soon added a second striker in Sam Vokes, sacrificing King and his five-man midfield.

But the positive move merely gave Croatia more space to work in and Eduardo was unlucky not to grab his second goal with a header that crashed off the crossbar.

Bale, in brilliant solo mode once again, nearly set up a grandstand finish as he ran half the length of the field and nearly forced his shot under Pletikosa, before seeing the Rostov keeper save a well-struck free-kick.

Wales now have until next March to lick their wounds before what promises to be a spicy return match against Scotland.