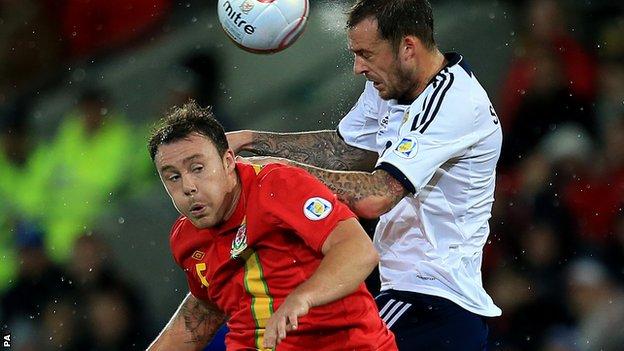 Darcy Blake says Wales are contenders in World Cup qualifying Group A as they prepare to face Croatia.

Wales secured their first victory of the World Cup qualifying campaign with a 2-1 win over Scotland.

Croatia are only second behind Belgium on goal difference and unbeaten after three games.

"We're in this group, definitely. We've turned the corner and onwards and upwards from here," Crystal Palace defender Blake said.

Against Scotland in Cardiff, Wales had been trailing to a 27th-minute goal by James Morrison before Gareth Bale struck twice in the last nine minutes.

It was a much needed first win under manager Chris Coleman, with Wales now four points behind Croatia and Belgium.

And Blake hopes the victory over Scotland will propel Wales to go on a similar run to the one they had under the late Gary Speed during the latter part of 2011.

Wales won three of their final four Euro 2012 qualifiers although by then their qualification hopes had ended.

"A year ago it was a bit late [in the campaign] but now we're three games in," added the former Cardiff City player.

"Obviously we're disappointed we lost the first two games but hopefully we can get more wins under our belts, progress and let's get to Brazil."

Arsenal midfielder Aaron Ramsey will miss Tuesday's match in Osijek after picking up his second yellow card of the campaign in the win over Scotland.

Ramsey has been replaced by Wolves midfielder David Edwards, who missed the game against Scotland after his wife gave birth to their second child.

But the Norwich player says Wales will travel to Croatia in confident mood on the back of their first win in the group.

"But going there off the back of a win will make it a little bit easier.

"We have only played three games. There are a lot of games to go.

"We've got to play everyone again so if we can go on a run, you never know what might happen."