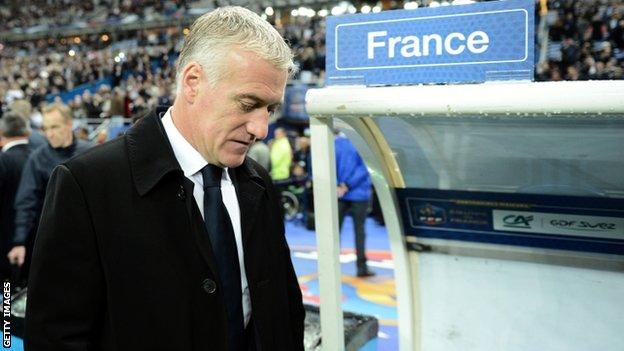 "Yes it's a problem. It's another problem. Today, all I have is problems."

That was the gloomy response last week of France coach Didier Deschamps to a question concerning injuries to Abou Diaby, Rio Mavuba and Lassana Diarra.

It was an answer that suggested he is already feeling the strain.

The 43-year-old, who replaced Laurent Blanc in July, is desperately short of proven midfielders for Tuesday's World Cup qualifier away to Spain - and nothing he saw in Friday's 1-0 friendly defeat by Japan will have instilled fresh optimism.

Managing Les Bleus is not as easy as it was when Deschamps was a player. Gone are the days when Thierry Henry might be rested to give David Trezeguet a run, when Robert Pires could replace Zinedine Zidane or Claude Makelele step in for Patrick Vieira.

Deschamps can only dream of such riches. As well as losing the aforementioned trio to injury, the 44-year-old travels to Madrid without Samir Nasri, Yann M'Vila, Alou Diarra, Hatem Ben Arfa and Marvin Martin, players out of form or favour.

Although they triumphed in their first two qualifiers against Finland and Belarus, few are tipping Deschamps' new-look team to upset the world champions.

"Spain's great strength is their midfield so it's going to be very difficult for us," ex-France and Arsenal playmaker Pires told BBC Sport. "We'll have to compensate for our inexperience by being extremely focused and ready to run hard for 90 minutes."

In total, the seven midfielders selected by Deschamps have only 53 caps between them - a figure dwarfed by the 473 accumulated by their Spanish counterparts.

As well as lacking experience, Pires is not convinced the likely starting quartet of Yohan Cabaye, Blaise Matuidi, Etienne Capoue and Mathieu Valbuena possess the kind of qualities needed to trouble Xavi and friends.

"If you want to unsettle Spain, you have to get stuck in," explains Pires, who spent four seasons at Spanish side Villarreal after leaving Arsenal, before ending his career with Aston Villa.

"I'm not saying you have to play dirty, but you have to make sure they sense your presence.

"I don't think we have players to do that. Our midfielders have other qualities. But we lack a player like Deschamps. He was very clever and would always put his foot in at the right time."

Deschamps' qualities as a leader are arguably being missed even more acutely than his talents as player.

Les Bleus have appeared rudderless at the last three major tournaments. There was at least no training-ground strike at Euro 2012 as there was at the 2010 World Cup, yet the disciplinary procedures taken against Nasri, Jeremy Menez and M'Vila following a tame quarter-final exit to Spain prove behaviour remains a problem.

Pires, who earned 79 caps, insists it would have been impossible to show such indiscipline a decade ago.

"Back then we had a team of captains," the former world and European champion says. "When you have guys in the dressing room like Zidane, Deschamps, Blanc, Marcel Desailly, Emmanuel Petit, Youri Djorkaeff and Lilian Thuram, you don't dare speak, let alone misbehave. We don't have any leaders today."

While goalkeeper Hugo Lloris will again wear the armband at the Vicente Calderon, Deschamps has hinted he would prefer to have an outfield captain, and may ultimately turn to Lille midfielder Mavuba.

We lack a player like Deschamps - he was very clever

"Mavuba has shown in recent games he could become a leader for France," Pires muses. "Franck Ribery and Karim Benzema also have important roles to play in the next few years. They need to take on more responsibility."

France's standing has suffered in the last six years, but there is a feeling they are recovering from the traumatic conclusion to the Raymond Domenech era. A 23-match unbeaten run under Blanc helped the 1998 World Cup winners climb from 27th to 13th in the Fifa rankings - and Pires is confident they will continue to improve.

"With Deschamps in charge, I'm not worried," he says. "He's a very tough character and that's exactly what we need. Didier won't stand for any bad behaviour."

The former Monaco, Juventus and Marseille boss has already stated he will ignore players that do not adhere to his instructions, and sent out a clear message by refusing to recall Nasri despite the Manchester City midfielder having completed the three-match ban he received for insulting a journalist in Ukraine.

A pragmatic trainer, renowned for developing well-drilled, athletic teams, Deschamps' France could prove harder to beat than Blanc's side was in June, when Xabi Alonso's double enabled Spain to progress comfortably to the last four.

"When you look at the way France played in that quarter-final you have to wonder about the motivation and behaviour of some players," Pires says. "But Deschamps will learn from that defeat and he'll prepare his team well. I'm expecting a strong performance."

Whether that proves enough to stop a Spain team that is unbeaten in its last 47 World Cup qualifiers is a different matter entirely.