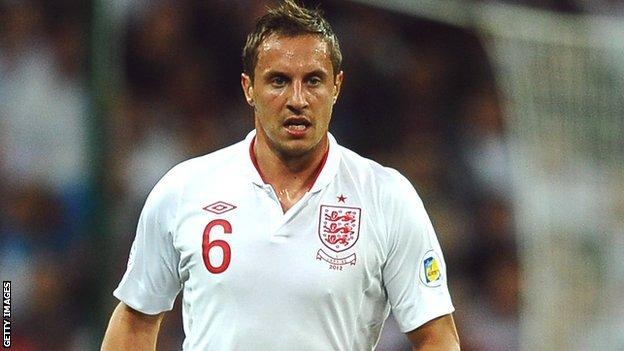 The Everton defender, 30, is expected to earn his 16th cap in Tuesday's World Cup qualifier against Poland in Warsaw.

He is happy to accept responsibility of being England's defensive leader after Terry's recent decision to quit.

"You'll have to see who takes the mantle of leading the back four, I'll chuck my name in the hat," he said.

The defenders central to England's hopes in Poland

Jagielka, once described by former coach Fabio Capello as "the general", is ready to finally step out of the shadows cast by the lengthy England careers of former captains Terry and Manchester United's Rio Ferdinand.

He added: "John's decided to retire now and there's a few of us competing for the two spots available.

"You've got Gary Cahill, who had a great game against San Marino going forward, and Joleon Lescott, who had a fantastic Euros, plus the other lads coming into the squad like Ryan Shawcross. It's going to keep us on our toes.

"John and Rio played together for England forever didn't they? They had a great partnership and there were a couple of others behind them waiting for a game. So you are down a long list of players trying to get your chance but time passes and people have good form, bad form and you get your opportunities.

"I've been around the squad for the last couple of years or so, played a game here and there and I'd like to play on a more consistent basis. But if the boss said 'come here and play every other game' I'd take that as well."

Chelsea defender Terry announced his decision to retire from international football on 23 September, days before he was found guilty of racially abusing Queens Park Rangers defender Anton Ferdinand by the Football Association.

Jagielka, who made his senior international debut against Trinidad and Tobago in June 2008, admits he felt mixed emotions when he heard Terry was ending his England career.

He said: "If John was here I would say exactly the same thing - gutted as an England fan because he has been a fantastic player for England. He's put his body on the line for many years now but he had his reasons.

"It was his decision, he wasn't forced as in a gun was put to his head or anything. It was his choice so, as I say, if you look at it from a purely personal point of view, it was one less person to compete with playing for England.

"As much as I was gutted he wasn't going to play for England again, it was also an opportunity for me to try and go higher up the pecking order."