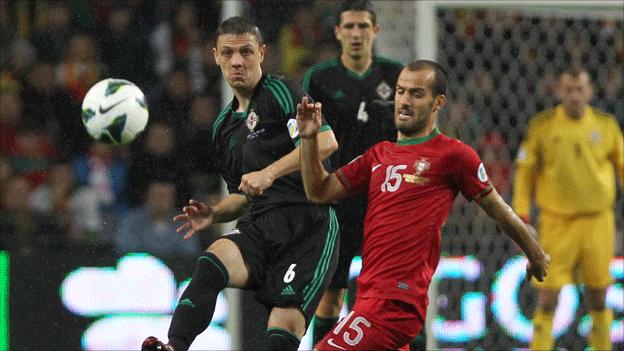 Northern Ireland produced a heroic display to secure a shock point against Portugal in their World Cup qualifier.

Niall McGinn gave the visitors the lead when he chipped the ball over goalkeeper Rui Patricio after good work by Jonny Evans and Kyle Lafferty.

The Portuguese dominated the game but Northern Ireland defended stoutly until Helder Postiga turned and struck home the equaliser after 79 minutes.

The result will rank as one of Northern Ireland's best-ever away performances.

Portugal, who are ranked third in the world, had several chances to level but Michael O'Neill's side held on to earn a deserved draw.

Northern Ireland came into the game with a poor record of just one win in their last 18 matches and two victories in their last 29, but had the backing of almost 1,200 supporters in the Dragao Stadium in Porto.

O'Neill made four changes from the side that drew 1-1 with Luxembourg last month, with Craig Cathcart, Oliver Norwood, Corry Evans and Niall McGinn coming into the team.

Three of the changes were enforced as Gareth McAuley was suspended and Chris Brunt and Shane Ferguson injured, while Dean Shiels dropped to the bench.

Portugal boasted six points from their opening three qualifying fixtures, but were keen to return to winning ways after suffering a 1-0 defeat to Russia in Moscow on Friday.

The Portuguse started the match brightly and Postiga just failed to get a touch after Miguel Lopes fired the ball into the penalty area.

Northern Ireland came more into the game and Norwood's low, 25-yard free-kick went into the arms of Rui Patricio.

The visitors took a shock, yet deserved lead, on the half hour when Evans played the ball forward to Lafferty, who found McGinn.

The Aberdeen winger took one touch before chipping the ball over the advancing home goalkeeper for his first international goal.

Norwood then attempted a cheeky lob over the head of Rui Patricio, but the keeper managed to retreat just in time to collect the ball.

At the other end, Cathcart almost scored an own-goal as the ball ricocheted off his leg on to the bar, while Joao Pereira shot wide as the Euro 2012 semi-finalists began to pile on the pressure.

Some heroic defending saw O'Neill's side go in ahead at half-time, but Portugal came close at the start of the second period when Ruben Micael's long-range strike went narrowly over the bar.

Postiga forced Northern Ireland keeper Roy Carroll into a save, but the flag was already up for offside, and then Ronaldo met Nani's cross but Carroll was equal to the task as he saved the Real Madrid forward's shot with his legs.

The Olympiakos goalkeeper was again called into action to palm away a fierce drive from substitute Ruben Amorim, while Steven Davis skewed the ball over his own bar as the desperate rearguard action continued.

Ronaldo closed in on goal again but Aaron Hughes made a crucial block to deny the striker a 38th international goal.

Carroll twice denied Postiga, but the striker found the net 11 minutes from time when the ball fell to him in the area and he whipped the ball into the back of the net from close range.

In the closing minutes, Carroll made yet another fine stop from Silvestre Varela, Nani fired inches wide and the outstanding Evans made a vital intervention to clear Eder's dangerous cross into the area.

Northern Ireland have two points from their opening three fixtures and face Azerbaijan in their next qualifying game in Belfast on 14 November.